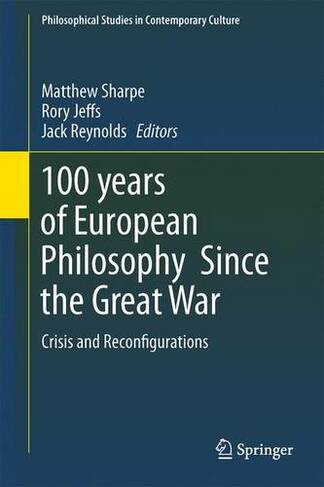 This book is a collection of specifically commissioned articles on the key continental European philosophical movements since 1914. It shows how each of these bodies of thought has been shaped by their responses to the horrors set in train by World War I, and considers whether we are yet 'post-post-war'. The outbreak of World War I in August 1914,set in chain a series of crises and re-configurations, which have continued to shape the world for a century: industrialized slaughter, the end of colonialism and European empires, the rise of the USA, economic crises, fascism, Soviet Marxism, the gulags and the Shoah. Nearly all of the major movements in European thinking (phenomenology, psychoanalysis, Hegelianism, Marxism, political theology, critical theory and neoliberalism) were forged in, or shaped by, attempts to come to terms with the global trauma of the World Wars. This is the first book to describe the development of these movements after World War I, and as such promises to be of interest to philosophers and historians of philosophy around the world. IX, 276 p.

Profile Author / Editor 1: AsPro Sharpe teaches philosophy at Deakin University, and is a founding member of the Melbourne School of Continental Philosophy. He is the author of articles on European philosophy, psychoanalysis, critical theory and the history of ideas, and of Camus, Philosophe (Brill, 2015), and a member of several Australian Research Council grants in the humanities. <Profile Author / Editor 2: Rory Jeffs is completing his PhD on the work and legacy of Alexandre Kojeve's philosophy at Deakin University, where he also teaches on a sessional basis. He is the author of several articles on Kojeve and 20th century readings of Hegel, as well as on other subjects such as Marxism and political theology. Profile Author / Editor 3: Jack Reynolds is Professor of Philosophy at Deakin University. He has written four books: Chronopathologies: The Politics of Time in Deleuze, Derrida, Analytic Philosophy and Phenomenology (2012), Analytic Versus Continental: Arguments on the Methods and Value of Philosophy (2011, with James Chase), Merleau-Ponty and Derrida: Intertwining Embodiment and Alterity (2004), and Understanding Existentialism (2006). He has also co-edited six collections, including Sartre: Key Concepts (2013), Continuum Companion to Existentialism (2011), Postanalytic and Metacontinental: Crossing Philosophical Divides (2010), and Merleau-Ponty: Key Concepts (2008). He is currently writing a book called Phenomenology, Naturalism and Empirical Science: A Hybrid and Heretical Proposal (forthcoming, Routledge)