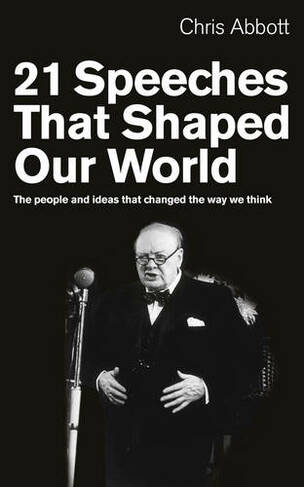 21 Speeches That Shaped Our World: The people and ideas that changed the way we think

In this fascinating book, Chris Abbott, a leading political analyst, takes a close look at 21 key speeches which have shaped the world today. He examines the power of the arguments embedded in these speeches to inspire people to achieve great things, or do great harm. Abbott draws upon his political expertise to explain how our current understanding of the world is rooted in pivotal moments of history. These moments are captured in the words of a range of influential speakers including: Emmeline Pankhurst, Martin Luther King, Jr, Enoch Powell, Napoleon Beazley, Kevin Rudd, Alexander Solzhenitsyn, Ronald Reagan, George W. Bush, Osama bin Laden, Margaret Beckett, Winston Churchill, Salvador Allende, Margaret Thatcher, Tony Blair, Tim Collins, Mohandas Gandhi, Dwight D. Eisenhower, Robin Cook and Barack Obama. The speeches in this book are arranged thematically, linked by concepts such as 'might is right', 'with us or against us' and 'give peace a chance'. Each transcript is accompanied by an insightful commentary that analyses how the words relate to our modern society. Fresh and relevant, this is a book that will make you stop in your tracks and think about what is really happening in the world today.

Chris Abbott is an influential writer and researcher in the areas of defence, security and international relations. He is the Founder & Executive Director of Open Briefing, the world's first civil society intelligence agency. He is an Honorary Visiting Research Fellow in the School of Social and International Studies at the University of Bradford, and until 2009 was the Deputy Director of Oxford Research Group. His two books are published by Rider: 21 Speeches that Shaped Our World: The People and Ideas that Changes the Way We Think (2010), and Beyond Terror: The Truth About the Real Threats to Our World, co-authored with Paul Rogers and John Sloboda (2007). Chris has a degree in Psychology from Royal Holloway, University of London, and a Masters in Social Anthropology from the University of St Andrews. He lives in West Cornwall with his wife and their dog.