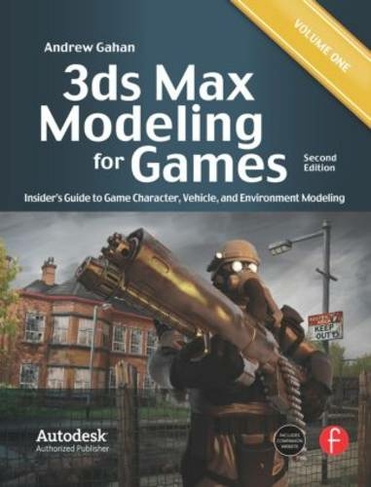 With 18 years under his belt in the game industry, a key contributor to the MotorStorm series, and the creator of the 3ds Max in Minutes video series (at FocalPress.com), Andrew Gahan delivers the expert techniques in 3ds Max Modeling for Games, 2nd edition. This updated edition is packed with new tutorials that will enhance your modeling skills and pump up your portfolio with high-quality work in no time. Along with Anthony O'Donnell and a team of experts, Gahan covers all of the fundamental game modeling techniques, including character and environment modeling, mapping, and texturing. Finally, a bonus section in 3ds Max Modeling for Games offers readers insights and tips on how to get their careers started in the game industry. New, expanded tutorials take readers of all abilities through full character and environment modeling from beginning to end Companion website (3d-for-games.com) offers a robust, supportive forum where readers can get commentary on new work, develop skills and portfolio art, as well as network with other game artists on a variety of projects. Also features project files for all tutorials in the book and enough support images and photos to keep the budding artist busy for months Completely updated gallery allows the reader to build on various models 400 Line drawings, color

Andrew Gahan is a leading industry expert in next generation consoles and digital gaming. His roles have included Senior Artist, Lead Artist, Art Manager, Art Director, Art Outsource Manager, and Producer. Andrew is an expert in all gaming tools for commercial game development, including: 3ds Max, Maya, Photoshop, XSI, Gen Head, Z Brush, Mud Box, and Poly-boost (as well as other 3ds max plug-ins).During this time Andrew has worked on 14 standalone published games as well as sequential spin-off products; as well as developing a number of military training systems for the Warrior - Armoured Fighting Vehicle, Harrier and Tornado aircraft. In the last decade Andrew has been involved in recruitment and development of artists, including theoretical and practical training. Andrew has been a freelance consultant helping companies to develop and improve tools and applications that are used by artists in the digital gaming industry.Andrew is currently a visiting speaker and advisor at Liverpool John Moore University for the MA digital games course; and is an external advisor at the University of Bolton, supporting the development of their forthcoming 3D related courses. Andrew has judged the Independent Games Festival for the past 2 years. He has been a visiting speaker at Liverpool John Moore University since 2005, and will also be a speaker at the University of Bolton for the forthcoming 3D Games Modeling course.Andrew Gahan has given numerous media interviews, of which a recent selection is given below: 15 December 2007. Interview with Gamasutra magazine Media consumption: MotorStorm's Andy Gahan.Television interview for 1-up.com with Pete Smith (Executive External Producer, SCEE (Sony)) in San Francisco, during GDC (Game Developer Conference) in the Sony Store for the launch of MotorStorm.Television interview for GamerTV with Pete Smith (Executive External Producer, SCEE (Sony)) in San Francisco, during GDC (Game Developer Conference)