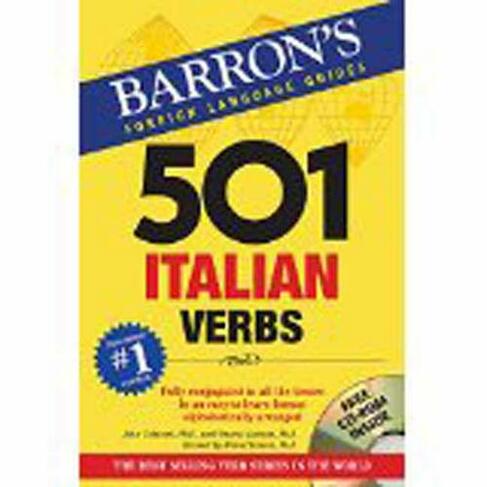 The bestselling 501 Verbs Series is the #1 reference source for verb usage in virtually every major language. It's printed in two colors, features tinted page edges for ease of reference, and comes with extra help for students in the form of a CD-ROM.

Marcel Danesi was born in Lucca, Italy. He has a Ph.D. in Italian Linguistics and is the Director of the Program in Semiotics and Communication Theory and Professor of Semiotics and Linguistic Anthropology at the University of Toronto. Danesi has been a visiting professor at Rutgers University, the University of Rome "La Sapienza," the Catholic University of Milan, and has given lectures throughout the academic world. He also holds an appointment at the Ontario Institute for Studies in Education as professor and researcher in bilingual education. He was made a Fellow of the Royal Society of Canada in 1998, founded a research center (Center for Communication and Information Sciences), and is the Editor-in-Chief of Semiotica, the official journal of the International Association for Semiotic Studies. Dr. Danesi has authored and coauthored numerous language manuals for the study of Italian and Spanish, and his work has been featured in the New York Times, among other print publications, and he has been a guest on several broadcast outlets including National Public Radio.