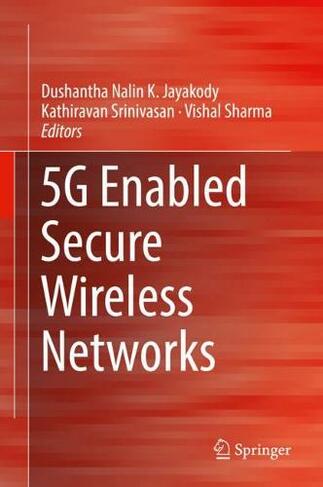 This book covers issues related to 5G network security. The authors start by providing details on network architecture and key requirements. They then outline the issues concerning security policies and various solutions that can handle these policies. Use of SDN-NFV technologies for security enhancement is also covered. The book includes intelligent solutions by utilizing the features of artificial intelligence and machine learning to improve the performance of the 5G security protocols and models. Optimization of security models is covered as a separate section with a detailed information on the security of 5G-based edge, fog, and osmotic computing. This book provides detailed guidance and reference material for academicians, professionals, and researchers. Presents extensive information and data on research and challenges in 5G networks; Covers basic architectures, models, security frameworks, and software-defined solutions for security issues in 5G networks; Provides solutions that can help in the growth of new startups as well as research directions concerning the future of 5G networks. 41 Tables, color; 62 Illustrations, color; 2 Illustrations, black and white; XVIII, 200 p. 64 illus., 62 illus. in color.

DushanthaNalin K. Jayakody received the Ph. D. degree in Electronics, Electrical, and Communications Engineering in 2014, from the University College Dublin, Ireland. He received his MSc degree in Electronics and Communications Engineering from the Department of Electrical and Electronics Engineering, Eastern Mediterranean University, Turkey (under the University full graduate scholarship) and ranked as the first merit position holder of the department, and B. E. electronics engineering degree (with first-class honors) from Pakistan and was ranked as the merit position holder of the University (under SAARC Scholarship.). From 2014 - 2016, he was a Postdoc Research Fellow at the Institute of computer science, University of Tartu, Estonia and Department of Informatics, University of Bergen, Norway. From summer 2016, he is a Professor at the School of Computer Science& Robotics, National Research Tomsk Polytechnic University, Russia, where he also serves as the Director of Tomsk Infocomm Lab. DrJayakody has received the best paper award from the IEEE International Conference on Communication, Management and Information Technology (ICCMIT) in 2017. Dr. Jayakody has published over 80 international peer reviewed journal and conference papers. His research interests include PHY layer prospective of 5G communications, Cooperative wireless communications, device to device communications, LDPC codes, Unmanned Ariel Vehicle etc. Dr. Jayakody is a Senior Member of IEEE and he has served as workshop chair, session chair or technical program committee member for various international conferences, such as IEEE PIMRC 2013/2014, IEEE WCNC 2014-2018, IEEE VTC 2015-2018 etc. He currently serves as anArea Editor of Elsevier Physical Communications Journal, MDPI Information journal and Wiley Internet of Technology Letters. Also, he serves as a reviewer for various IEEE Transactions and other journals. Kathiravan Srinivasan, received his B.E., in Electronics and Communication Engineering and M.E., in Communication Systems Engineering from Anna University, Chennai, India. He also received his Ph.D., in Information and Communication Engineering from Anna University Chennai, India. He is presently working as an Associate Professor in the School of Information Technology and Engineering at Vellore Institute of Technology (VIT), India. He was previously working as a faculty in the Department of Computer Science and Information Engineering and also as the Deputy Director- Office of International Affairs at National Ilan University, Taiwan. He has won the Best Conference Paper Award at 2018 IEEE International Conference on Applied System Innovation, Chiba, Tokyo, April 13-17, 2018. Further, he has also received the Best Service Award, Department of Computer Science & Information Engineering, National Ilan University, Taiwan. In 2017, he has won Best Paper Award at 2017 IEEE International Conference on Applied System Innovation, Sapporo, Japan, May 13-17, 2017 and Best Paper Award at International Conference on Communication, Management and Information Technology (ICCMIT 2017), Warsaw, Poland. In 2016, he received the Best Service Award as the Deputy Director at Office of International Affairs, National Ilan University. He is presently serving as the Associate Editor for IEEE Access and Editorial Board Member and reviewer for various SCI, SCIE and Scopus Indexed Journals. He has played an active role in organizing several International Conferences, Seminars and Lectures. He has been a key note speaker in many International Conferences and IEEE events Vishal Sharma received the Ph.D. and B.Tech. degrees in computer science and engineering from Thapar University (2016) and Punjab Technical University (2012), respectively. He worked at Thapar University as a Lecturer from Apr'16-Oct'16. From Nov. 2016 to Sept. 2017, he was a joint post-doctoral researcher in MobiSec Lab. at Department of Information Security Engineering, Soonchunhyang Univer