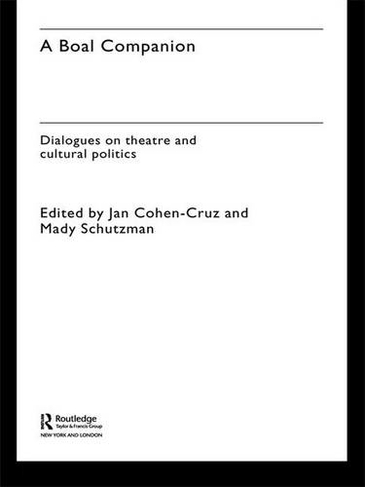 A Boal Companion Dialogues on Theatre and Cultural Politics

This carefully constructed and thorough collection of theoretical engagements with Augusto Boal's work is the first to look 'beyond Boal' and critically assesses the Theatre of the Opressed (TO) movement in context. A Boal Companion looks at the cultural practices which inform TO and explore them within a larger frame of cultural politics and performance theory. The contributors put TO into dialogue with complexity theory - Merleau-Ponty, Emmanuel Levinas, race theory, feminist performance art, Deleuze and Guattari, and liberation psychology - to name just a few, and in doing so, the kinship between Boal's project and multiple fields of social psychology, ethics, biology, comedy, trauma studies and political science is made visible. The ideas generated throughout A Boal Companion will: expand readers' understanding of TO as a complex, interdisciplinary, multivocal body of philosophical discourses provide a variety of lenses through which to practice and critique TO make explicit the relationship between TO and other bodies of work. This collection is ideal for TO practitioners and scholars who want to expand their knowledge, but it also provides unfamiliar readers and new students to the discipline with an excellent study resource.

Jan Cohen-Cruz wrote Local Acts: Community-based Performance in the US, edited Radical Street Performance, and, with Mady Schutzman, co-edited Playing Boal: Theatre, Therapy, Activism. She is an associate professor at NYU where she teaches in the Drama and the Art and Public Policy Departments.Mady Schutzman is author of The Real Thing: Performance, hysteria, and advertising, and co-editor, with Jan Cohen-Cruz, of Playing Boal: Theatre, therapy, activism. She teaches at California Institute of the Arts and is an advisory board member of L.A. Center for Theatre of the Oppressed. Jan Cohen-Cruz and Mady Schutzman hosted Boal at NYU in 1987-88, brought a group of 20 cultural practitioners to Rio de Janeiro for 3 weeks to study with Boal in 1989, and co-edited Playing Boal: Theatre, therapy, activism in 1994.