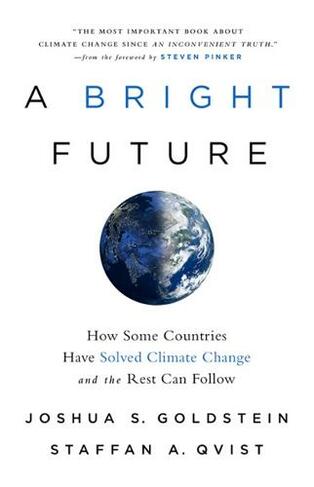 A Bright Future: How Some Countries Have Solved Climate Change and the Rest Can Follow

By Joshua S. Goldstein (Author), Staffan A. Qvist (Contributor)
Hardback
https://www.whsmith.co.uk/products/a-bright-future-how-some-countries-have-solved-climate-change-and-the-rest-can-follow/joshua-s-goldstein/staffan-a-qvist/hardback/9781541724105-12-000.html £16.00 rrp £20.00 Save £4.00 (20%)
GBP
Availability
In Stock
Free Delivery Available When You Spend £25 Or More
Details
Spend £25 On Products To Receive Free Standard Delivery To Your Home Or Free Next Working Day Click And Collect To Store
Share

As climate change begins to take a serious toll on the planet--with much more damage yet to come--a solution to our warming problems is hiding in plain sight. We need to commit to de-carbonizing our economy, and do so immediately, but so far we have lacked the courage to really try. Our fears of nuclear energy have grown irrationally large, even as our fears of climate change are irrationally small. In this clear-sighted and compelling book, Joshua Goldstein and Steffan Qvist come bearing good news: a real solution, one that is fast, cheap, and provably works. Based on Sweden's success cutting their carbon emissions in half, Goldstein and Qvist argue for a policy that combines nuclear and renewable energy sources. From 1970-1990, Sweden replaced coal power plants with nuclear ones, and slowly integrated renewable energy alongside it. During that same time period, the country generated more electricity than ever and its economy grew by 50 percent. They have had no nuclear accidents, nor has any of their uranium been stolen by terrorists. Separating facts from doomsday scenarios, Goldstein and Qvist force a real and meaningful dialogue about what the best energy policy is, and the dangers of remaining on our present path. And they offer an answer that really could work--if only we'd give it a try. 120 4C photos

Joshua S. Goldstein is an International Relations professor who writes about the big issues facing humanity. He is the author of six books about war, peace, diplomacy, and economic history, and a bestselling college textbook, International Relations. Among other awards, his book War and Gender (2001) won the International Studies Association's 'Book of the Decade Award' in 2010. Goldstein has a B.A. from Stanford and a Ph.D. from M.I.T. He is professor emeritus at American University in Washington, DC, and research scholar at the University of Massachusetts, Amherst, where he lives. See www.joshuagoldstein.com.Staffan A. Qvist is a Swedish engineer, scientist and consultant to clean energy projects around the world. He has lectured and authored numerous studies in the scientific literature on various topics relating to energy technology and policy, nuclear reactor design and safety, and climate change mitigation strategies - research that has been covered by Scientific American and many other media outlets. Trained as a nuclear engineer (Ph.D., University of California, Berkeley), he is now involved in renewable energy development projects and also works with several 'fourth generation' nuclear start-ups. For more information, see www.staffanqvist.com.