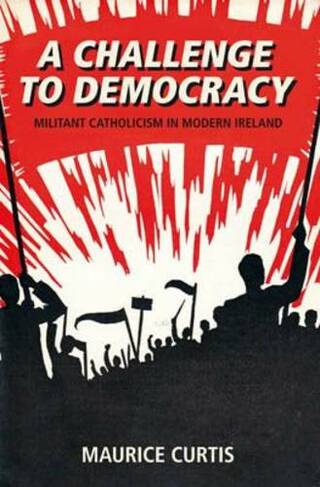 A Challenge to Democracy Militant Catholicism in Modern Ireland

By Maurice Curtis (Author)
Paperback
https://www.whsmith.co.uk/products/a-challenge-to-democracy-militant-catholicism-in-modern-ireland/maurice-curtis/paperback/9781845889692-01-000.html £14.44 rrp £16.99 Save £2.55 (15%)
GBP
Availability
Currently unavailable. We don't know when or if this item will be back in stock
Free Saver Delivery on orders over £20
Details
FREE SHIPPING over £20 for Saver Delivery
Share

Militant Catholicism refers to radical Catholic believers who believed that the only way for Ireland to remain a Catholic country was to combine together in lay organisations, to work in politics and society for the overthrow of the Protestant culture and to replace it with a strictly Catholic ethos. In the newly independent Ireland, Militant Catholicism played a crucial role in asserting the Catholic Church's influence on both politics and society. It was pivotal in helping to shape and consolidate public opinion, in copper-fastening the Catholic-Irish identity and in helping to enshrine the moral code in Irish law. It also had a resounding impact on the drafting of the 1937 Constitution of Ireland. Moreover, its influence can be seen in the growth of democracy and the political party system in Ireland, in the ideologies embraced by Fine Gael, Fianna Fail and Clann na Poblachta, and consequently on governments' social and economic policies.

Dr MAURICE CURTIS is a historian, writer and lecturer, with a particular interest in Social History, the Trade Union movement, and the influence of Religion on Irish society. In particular I am interested in ideology, identity and change in Ireland. A native of Dublin, Curtis has published two books and his historical writings have been featured in national magazines and journals. He is a regular book reviewer for the Irish Catholic.