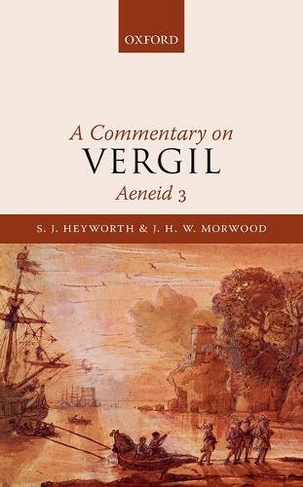 A Commentary on Vergil, Aeneid 3

The Aeneid, generally considered the greatest poem of Roman literature, is a story of migration, and Book 3 is at the heart of this story-the arrestingly dramatic account that Aeneas gives to the Carthaginian Queen Dido of his people's journey from the sacked city of Troy. This journey sees them encounter a series of brilliantly characterized individuals and visit some of the most extraordinary places in the central Mediterranean, both real and imaginary: shrines and volcanoes, floating islands and monsters. Yet though it is on one level a thrilling traveller's tale, it is also a profound story of a voyage from a dead past to an uncertain, but ultimately glorious, future in Augustan Rome. This new edition contains an introduction, the Latin text, and a detailed commentary, as well as an extensive Appendix illustrating the rich variety of texts that Vergil used as his models through an ample collection of relevant passages: from the heroic voyages described in the Odyssey and the Argonautica, to tragic explorations of the aftermath of Troy's fall (especially Euripides' Hecuba, Troades, and Andromache) and texts on Delos and Etna. The introduction grounds the book in its historical and literary contexts, while the commentary itself aims to bring out the poet's artistry and learning, keeping the dramatic situation of Aeneas' story-telling in view throughout. Translations of all cited Latin and Greek and regular references to Roman history will provide readers new and old with a clear understanding not only of the original text, but also of the poet's vision of Rome, history, and humanity. 4 black-and-white maps

Stephen Heyworth has been Bowra Fellow and Tutor in Classics at Wadham College, Oxford, since 1988, and has regularly read through Aeneid 3 in classes with his undergraduates. In 2007 he issued a radical new edition of Propertius in the Oxford Classical Texts series together with a detailed textual commentary entitled Cynthia, and subsequently published a literary and grammatical commentary on Book 3 with OUP in collaboration with James Morwood. Hehas also published on Catullus, Vergil, Horace, and Ovid, and has particular interests in the Callimachean tradition in Latin poetry and issues of poem division, politics, topography, and genre. His main focus is currently on Ovid's Fasti: he is writing a commentary on Book 3, to be published by Cambridge UniversityPress, and is studying the manuscript tradition as he moves towards an edition of the whole poem for the Oxford Classical Texts series.James Morwood was Head of Classics at Harrow School from 1979 until 1996 before becoming Grocyn Lecturer at the University of Oxford, responsible for the Greek and Latin language teaching in the Classics Faculty. He has long played an important part in the support systems for Classics in schools: in particular he has been President of the Joint Association of Classical Teachers and the London Association of Classical Teachers and is about to become editor of ad fam, the journal ofClassics for All. As well as co-authoring A Commentary on Propertius, Book 3 with Stephen Heyworth, he has produced Greek and Latin Grammars and a Latin dictionary for OUP as the co-author of the Oxford Latin Course. His academic work has centred on Greek tragedy and Augustanpoetry.