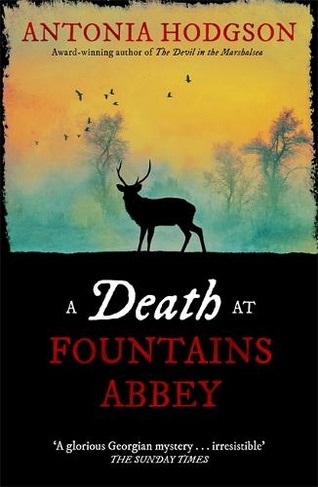 A Death at Fountains Abbey: Longlisted for the Theakston Old Peculier Crime Novel of the Year Award

'In a tale that more than matches its predecessors for pace and atmosphere, Hawkins is forced into confrontation with a psychopathic killer...hugely enjoyable' The Sunday Times 'You will burn.' Late spring, 1728. Fresh from his escape from the gallows, Thomas Hawkins has arrived in Yorkshire with his ward, Sam Fleet. But death still has a hand upon his shoulder, even in such idyllic surroundings. John Aislabie, Tom's reluctant host, is being tormented by anonymous letters threatening murder. A disgraced politician, Aislabie certainly has plenty of enemies. But, trapped in a house haunted by old tragedies, Tom begins to suspect that the danger lies much closer to home. Someone is playing a subtle and deadly game of revenge, years in the planning. And now Tom is standing in their way...

Antonia Hodgson's first novel, The Devil in the Marshalsea, won the CWA Historical Dagger 2014 and was shortlisted forthe Theakston's Crime Novel of the Year, the John Creasey Dagger for Best FirstNovel and the HWA Debut Crown. It was also a Richard & Judy and WaterstonesBook Club selection. Her second book, The Last Confession of Thomas Hawkins, was published in 2015 to widespread critical acclaim.Antonia was born and grew up in Derby and studied English at the University ofLeeds. She lives in London, where she works as an editor. 2