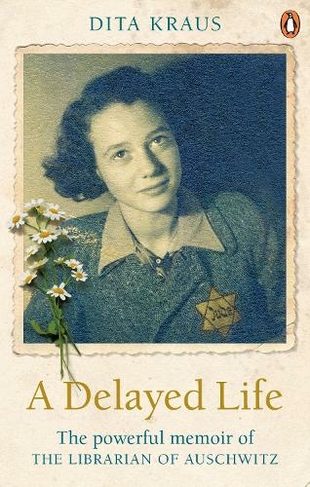 A Delayed Life: The true story of the Librarian of Auschwitz

The powerful, heart-breaking memoir of Dita Kraus, the real-life Librarian of Auschwitz Born in Prague to a Jewish family in 1929, Dita Kraus has lived through the most turbulent decades of the twentieth and early twenty-first centuries. Here, Dita writes with startling clarity on the horrors and joys of a life delayed by the Holocaust. From her earliest memories and childhood friendships in Prague before the war, to the Nazi-occupation that saw her and her family sent to the Jewish ghetto at Terezin, to the unimaginable fear and bravery of her imprisonment in Auschwitz and Bergen-Belsen, and life after liberation. Dita writes unflinchingly about the harsh conditions of the camps and her role as librarian of the precious books that her fellow prisoners managed to smuggle past the guards. But she also looks beyond the Holocaust - to the life she rebuilt after the war: her marriage to fellow survivor Otto B Kraus, a new life in Israel and the happiness and heartbreaks of motherhood. Part of Dita's story was told in fictional form in the Sunday Times bestseller The Librarian of Auschwitz by Antonio Iturbe. Her memoir tells the full story in her own words.

Dita Kraus was born in Prague. In 1942, when Dita was thirteen years old , she and her parents were deported to Ghetto Theresienstadt, later to Auschwitz, where Dita's father died. She and her mother were sent to forced labor in Germany and finally to the concentration camp of Bergen-Belsen. Dita's mother didn't survive.After the war Dita married the author Otto B. Kraus, who was a fellow prisoner at Auschwitz and a teacher in the camp. They emigrated to Israel in 1949, where they both worked as teachers They had three children. Since Otto's death in 2000, Dita lives alone in Netanya. She has four grandchildren and four great grandchildren.Despite the horrors of the concentration camps, Dita has kept her positive approach to life. She paints delicate watercolours of the colourful wildflowers that grow in Israel. Otto wrote a novel about his experiences, The Children's Block. (Originally published as The Painted Wall.)