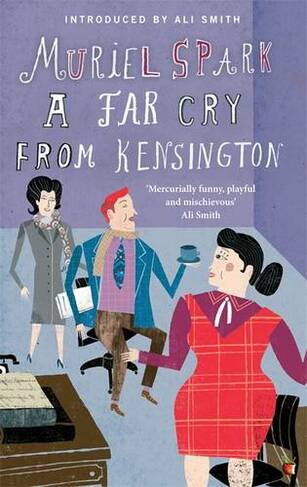 'Mercurially funny, playful and mischievous' Ali Smith 'I was in heaven reading this book. I think she writes like an angel . . . just blissful' Stephen Fry A novel of 'pure delight' (Claire Tomalin) by the author of The Prime of Miss Jean Brodie. When Mrs Hawkins tells Hector Bartlett he 'urinates frightful prose', little does she realise the repercussions. Holding that 'no life can be carried on satisfactorily unless people are honest' Mrs Hawkins refuses to retract her judgement, and as a consequence, loses not one, but two much-sought-after jobs in publishing. Now, years older, successful, and happily a far cry from Kensington, she looks back over the dark days that followed, in which she was embroiled in a mystery involving anonymous letters, quack remedies, blackmail and suicide. With an introduction by Ali Smith. 'Wonderfully entertaining.' Sunday Telegraph 'An outstanding novel ... A Far Cry From Kensington has an effortless, translucent grasp of the spirit of the period.' Observer

Muriel Spark, D.B.E, C. Litt, was born in Edinburgh in 1918. A poet and novelist, she also wrote children's books, radio plays, a comedy, 'Doctors of Philosophy', first performed in London in 1962, and biographies. She is best known for her stories and many successful novels, including Memento Mori, The Prime of Miss Jean Brodie, Loitering With Intent, The Comforters, A Far Cry from Kensington and The Public Image. For her long career of literary achievement, Muriel Spark won international praise and many awards, including the David Cohen British Literature Award, the T. S. Eliot Award, the Saltire Prize, the Boccaccio Prize for European Literature, the Gold Pen Award and the Italia Prize for dramatic radio. Muriel Spark was given an honorary doctorate of Letters from a number of universities, London, Edinburgh and Oxford among these. She died in 2006. Ali Smith was born in Inverness and lives in Cambridge. She is the author of three collections of stories and three novels. Hotel World was shortlisted for both the Booker Prize and the Orange Prize in 2001 and her latest novel, The Accidental, won the 2006 Whitbread Novel Award. Ali reviews regularly for the Guardian, the Scotsman and the TLS.