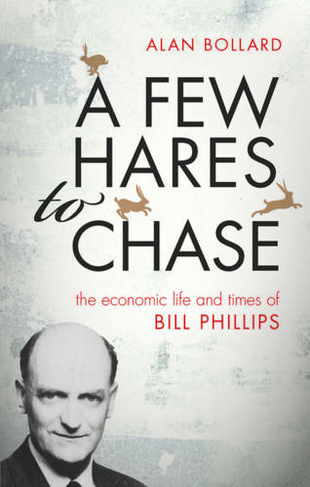 A Few Hares to Chase: The Economic Life and Times of Bill Phillips

The Phillips Curve is world famous amongst economists. The man who invented it was an inventor, an engineer, a genius, who led an exciting life and contributed to economics in many different ways. Born and brought up on a remote farm in rural New Zealand, his early life was a search for adventure. He invented toys and rebuilt machinery as a child. He experienced the rigours of the Great Depression on construction sites, and while still a young man he roamed the outback of Australia picking up casual work, sometimes working in gold mines, sometimes crocodile hunting. In 1937 he set off to discover militarising Japan, a guerrilla war in Manchuria, Stalin's Soviet Union, and the tensions in Europe. On the outbreak of war, he joined the RAF and was sent to Singapore where he rearmed planes but was eventually incarcerated in a POW camp by the Japanese. In camp he learned languages, invented gadgets for the troops and built a clandestine radio. If his first 30 years had been a search for adventure, his later life was a search for economic stability. Back in Britain after the war, he scraped through a sociology degree at the LSE, before convincing a sceptical faculty to let him build a hydraulic model of the economy. This beautiful complex machine was a great success and put Bill Phillips on the track of serious economics. In the next few decades he developed new ideas for stabilising economies, was one of the first to use electronic computers, developed the Phillips Curve, showed ways to help an economy to grow, and developed new techniques to model economies. Always innovative, he took another heading in his later years, working out how to stabilise the Chinese economy which was being wracked by the Cultural Revolution. Bill Phillips pioneered a dozen new directions in economics, making him one of the most innovative and influential of our economic pioneers. Plate section with 12 black and white photos

Alan Bollard is CEO of Secretariat of Asia Pacific Economic Cooperation and former Governor of the Central Bank of New Zealand. Previously he was Secretary to the NZ Treasury and he has also run New Zealand's competition authority, and the New Zealand Institute of Economic Research. He has also worked in Britain and the Pacific Islands. He has written widely, principally about the New Zealand economy, and he was awarded the CNZM by the New Zealand Government. Hemet Bill Phillips as a young graduate student and helped restore the famous Phillips hydraulic machine.