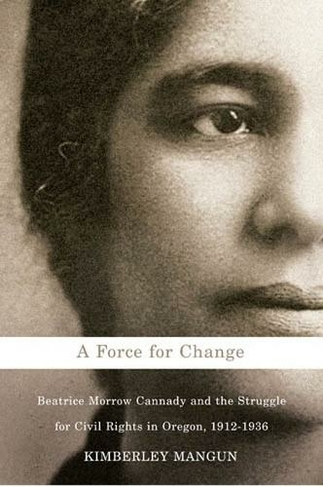 A Force for Change

A Force for Change is the first full-length study of the life and work of one of Oregon's most dynamic civil rights activists, African American journalist Beatrice Morrow Cannady. Between 1912 and 1936, Cannady tirelessly promoted interracial goodwill and fought segregation and discrimination. She gave hundreds of lectures to high school and college students and shared her message with radio listeners across the Pacific Northwest. She was assistant editor, and later publisher, of The Advocate, Oregon's largest African American newspaper. Cannady was the first black woman to graduate from law school in Oregon, and the first to run for state representative. She held interracial teas in her home in Northeast Portland and protested repeated showings of the racist film The Birth of a Nation. And when the Ku Klux Klan swept into Oregon, she urged the governor to act quickly to protect black Oregonians' right to live and work without fear. Despite these accomplishments-and many more during her twenty-five-year career-Beatrice Cannady fell into obscurity when she left Oregon in about 1938. A Force for Change illuminates Cannady's important role in advocating for better race relations in Oregon in the early decades of the twentieth century. It describes her encounters with the period's leading black artists, editors, politicians, and intellectuals, including W.E.B. Du Bois, Langston Hughes, A. Philip Randolph, Oscar De Priest, Roland Hayes, and James Weldon Johnson. It dispels the myth that African Americans played little part in Oregon's history and enriches our understanding of the black experience in Oregon. A Force for Change is an invaluable resource for students and scholars of women's history, gender studies, African American history, journalism history, and Pacific Northwest history. It belongs on the shelf of any reader interested in a richer understanding of the civil rights movement in Oregon and across the country.

Kimberley Mangun is a professor in the University of Utah's Department of Communication. Before earning a PhD at the University of Oregon, she worked as managing editor of alternative media publications, magazine publisher, and freelance writer. Her research on Beatrice Morrow Cannady was the basis for an Oregon Public Broadcasting documentary that premiered in May 2007. Mangun's articles have appeared in American Journalism, Oregon Historical Quarterly, Pacific Northwest Quarterly, and African American National Biography.

A Force for Change
A Force for Change
Kimberley Mangun
Paperback
Special Order item not currently available. We'll try and order for you
https://www.whsmith.co.uk/products/a-force-for-change/kimberley-mangun/paperback/9780870715808.html £24.50
GBP