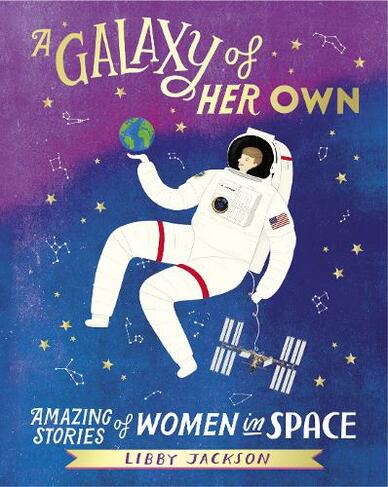 A Galaxy of Her Own: Amazing Stories of Women in Space

By Libby Jackson (Author)
Hardback
https://www.whsmith.co.uk/products/a-galaxy-of-her-own-amazing-stories-of-women-in-space/libby-jackson/hardback/9781780898360-12-000.html £13.59 rrp £16.99 Save £3.40 (20%)
GBP
Availability
In Stock
Free Delivery Available When You Spend £25 Or More
Details
Spend £25 on eligible products to receive free standard delivery to home or free next working day click and collect to store
Share

From small steps to giant leaps, A Galaxy of Her Own tells fifty stories of inspirational women who have been fundamental to the story of humans in space, from scientists to astronauts to some surprising roles in between. From Ada Lovelace in the nineteenth century, to the women behind the Apollo missions, from the astronauts breaking records on the International Space Station to those blazing the way in the race to get to Mars, A Galaxy of Her Own reveals extraordinary stories, champions unsung heroes and celebrates remarkable achievements from around the world. Written by Libby Jackson, a leading UK expert in human space flight, and illustrated with bold and beautiful artwork from the students of London College of Communication, this is a book to delight and inspire trailblazers of all ages. Packed full of both amazing female role models and mind-blowing secrets of space travel, A Galaxy of Her Own is guaranteed to make any reader reach for the stars.

Libby Jackson is one of Britain's foremost space experts, and is the Human Spaceflight and Microgravity Programme Manager for the UK Space Agency. Libby's career working in the space industry began when she applied for work experience at NASA aged 17 from her secondary school in Kent. Weeks later she was sitting in Mission Control in Houston. 10 years on, and after completing a physics degree at Imperial College, she was back working at Mission Control from the European Space Agency side in Munich. Since then she has worked as a Columbus Flight Director on missions to the International Space Station. From 2014 - 2016, she managed the hugely successful UK Space Agency education and outreach programmes that supported Tim Peake's mission.