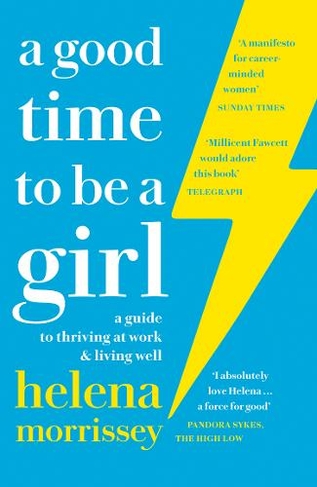 A Good Time to be a Girl: A Guide to Thriving at Work & Living Well

By Helena Morrissey (Author)
Paperback
https://www.whsmith.co.uk/products/a-good-time-to-be-a-girl-dont-lean-in-change-the-system/helena-morrissey/paperback/9780008241643-12-000.html £8.19 rrp £9.99 Save £1.80 (18%)
GBP
Availability
In Stock
Free Delivery Available When You Spend £25 Or More
Details
Spend £25 On Eligible Products To Receive Free Standard Delivery To You Home Or Free Next Working Day Click And Collect To Store
Share

From the founder of the worldwide 30% Club campaign comes a career book for women in a transforming world who don't just want to lean in, but instead, shatter the paradigm as we know it. `I absolutely love her, I think she's such a force for good' Pandora Sykes, The High Low In A Good Time to be a Girl, Helena Morrissey sets out how we might achieve the next big breakthrough towards a truly inclusive modern society. Drawing on her experience as a City CEO, mother of nine, and founder of the influential 30% Club which campaigns for gender-balanced UK company boards, her manifesto for new ways of working, living, loving and raising families is for everyone, not just women. Making a powerful case for diversity and difference in any workplace, she shows how, together, we can develop smarter thinking and broader definitions of success. Gender balance, in her view, is an essential driver of economic prosperity and part of the solution to the many problems we face today. Her approach is not aimed merely at training a few more women in working practices that have outlived their usefulness. Instead, this book sets out a way to reinvent the game - not at the expense of men but in ways that are right and relevant for a digital age. It is a powerful guide to success for us all.

Helena Morrissey is one of the best-known women in the City. She started her career in New York with Schroder Capital Management. After returning to London she joined Newton in 1994 as a junior fund manager and was appointed CEO in 2001. During her fifteen years leading the firm, assets under management grew from GBP20 billion to over GBP50 billion. Helena is now Chair of the Investment Association, the UK's industry trade body whose members manage more than GBP5 trillion and Head of Personal Investing at Legal and General Management, a new role aimed at engaging the nation to save and invest more. In 2010, Helena founded the 30% Club, a cross-business initiative to achieve better gender-balanced UK company boards. The 30% Club now leads efforts which span the whole career journey from schoolroom to boardroom and the proportion of female directors on UK listed company boards has more than doubled. The 30% Club approach has been adopted internationally, including in the US, Hong Kong, Ireland, Italy, South Africa, Australia, Canada, Malaysia and the Gulf Co-Operation Countries. Helena also chairs Business in the Community's gender equality campaign, part of the Prince of Wales' Responsible Business network.Helena has been named one of Fortune Magazine's World's 50 Greatest Leaders. She has twice been voted one of the 50 Most Influential People in Finance globally by Bloomberg Markets. Helena is a regular media commentator on topics as wide-ranging as climate change, executive pay and Brexit. Her well-received guest edit of the `Today' programme in December 2016 developed the theme of `power to the people' and featured contributions from Michael Gove, John Macfarlane and Michael Lewis. Helena is a Fellow of London Business School and was awarded an Honorary Doctorate by Cambridge University in 2016. She was appointed CBE in the 2012 New Year's Honours list for her contribution to the role of women in business. In 2017, she was made a dame. A Cambridge philosophy graduate, Helena is married to a Buddhist meditation teacher and they have nine children, six girls and three boys whose ages range from 8 to 26.