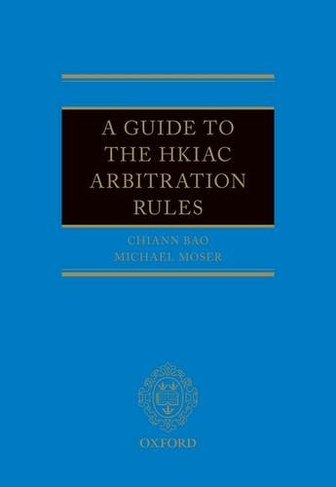 A Guide to the HKIAC Arbitration Rules

Also available on eBook for £108.47. Click here to purchase from Rakuten Kobo

This is the first detailed commentary on the Hong Kong International Arbitration Centre (HKIAC) Administered Arbitration Rules, providing practitioners with an insider's perspective on how the HKIAC Secretariat administers arbitrations under these rules. The Hong Kong International Arbitration Centre is one of the world's most sophisticated arbitration institutions, with a continuously growing annual caseload. This practical guide makes reference to the Hong Kong Arbitration Ordinance as well as drawing comparisons with other institutional rules and the UNCITRAL Model Rules to emphasize the key issues to consider when drafting an arbitral clause or strategizing over the conduct of an arbitration. As well as offering an insider's perspective, it provides examples of anonymous cases handled at the HKIAC and a discussion of various issues arising from arbitrations involving mainland parties or enforcing arbitration awards in mainland China. The book not only draws from the authors' many years of experience administering arbitrations under the HKIAC Administered Arbitration Rules (2008) but highlights the various changes made in the revised Rules that came into effect in November 2013 benefitting from the authors' privileged access. The book begins with an introduction to the HKIAC, including a history with statistics and details of other services, provided by the HKIAC itself. The commentary then goes on to examine each article in depth. Relevant supporting documents are appended, including Recommended HKIAC Arbitration Clauses; the HKIAC Administered Arbitration Rules (2013); the UNCITRAL Arbitration Rules 2010; and the Hong Kong Arbitration Ordinance. No aspect of HKIAC arbitration is left unexamined, and the guide stands alone as a comprehensive exposition of HKIAC arbitration.

Dr Michael J Moser is an international arbitrator, mediator, and attorney-at-law. He is currently an arbitrator member of 20 Essex Street Chambers in London and also maintains offices in Hong Kong and Beijing. He is Honorary Past Chairman of the Hong Kong International Arbitration Centre, Vice President of APRAG, a past Court Member of the London Court of International Arbitration, and a Board Member of the Arbitration Institute of the Stockholm Chamber of Commerce.Dr Moser has been advising foreign clients doing business in the Asia-Pacific region and the People's Republic of China since 1980. He was the first foreign national to be appointed as an arbitrator in China.Ms Chiann Bao is the Secretary-General of the Hong Kong International Arbitration Centre (HKIAC). As Secretary-General, she functions as the chief executive of the HKIAC and oversees the administration of arbitrations, mediations, adjudications, and other forms of dispute resolution at the HKIAC. She also ensures the HKIAC performs its statutory functions in appointing arbitrators and mediators, and leads the Secretariat in promoting the use of Hong Kong arbitration and other forms of disputeresolution worldwide. Bao is a board member of the Practical Law Company, a member of the International Advisory Board of the Association of Corporate Counsel, Councillor of the International Federation for Commercial Arbitration institutions, and a member of the editorial board of Asian DisputeReview. She regularly speaks on international arbitration, with a focus on Asia.