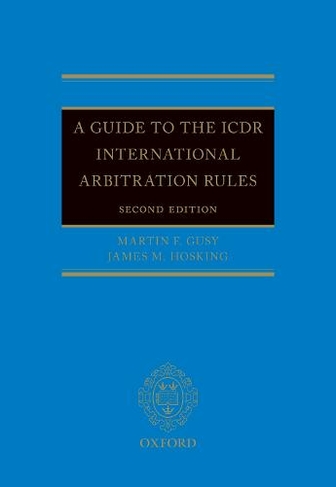 Also available on eBook for £106.31. Click here to purchase from Rakuten Kobo

The International Centre for Dispute Resolution (ICDR) is the international division of the American Arbitration Association (AAA). Given that in excess of 600 arbitrations are now administered every year under the ICDR Rules, this book answers the need for a comprehensive comparative guide devoted to them. This article-by-article commentary on the International Centre for Dispute Resolution (ICDR) Rules is a comprehensive reference work for practitioners and arbitrators considering ICDR arbitration. The second edition is fully revised and updated throughout to reflect all changes and updates to the Rules since the first edition published. The ICDR International Arbitration Rules are structured in accordance with the typical life-cycle of an international arbitration and the book follows this thematic structure, providing ample cross-referencing to assist the reader in understanding the relationship between the various rules and genuine issues likely to be encountered during an arbitration. The commentary embraces each of the Articles in their entirety, as well as the Expedited Procedure Articles, and includes discussion of how each provision compares to analogous rules of other major arbitral institutions. The authors draw on case law gathered from foreign jurisdictions as well as the rich vein of case law in the US (applying the ICDR Rules and, where appropriate, analogous provisions of various AAA domestic rules), combining these with their own extensive experience to provide a uniquely authoritative text. The work's comparative perspective emphasizes key issues to consider when drafting an arbitral clause or strategizing over the conduct of an arbitration. The second edition of A Guide to the ICDR International Arbitration Rules features multiple appendices and difficult-to-find resources to form a collection of core materials which include the ICDR Rules, the administrative fee schedule, guidelines for exchanges of information, practice notes, and key AAA cooperation agreements with other institutions.