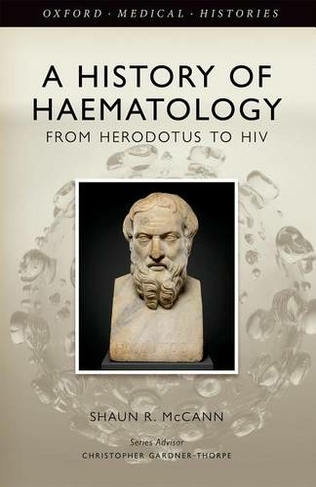 A History of Haematology From Herodotus to HIV

Also available on eBook for £39.59. Click here to purchase from Rakuten Kobo

Blood has long been an object of intrigue for many of the world's philosophers and physicians, and references to it have existed since the earliest studies of human anatomy. Herodotus of Halicarnassus, whose writings 500 years before the birth of Christ drew on stories collected during his widespread travels, was amongst the first to identify the ritualistic and medical significance of blood. However, despite this long established history, haematology as a medical specialty is relatively new. A History of Haematology: From Herodotus to HIV traces the history of haematology from biblical times to the present, discussing the major defining discoveries in the specialty, ranging from war as a catalyst for the development of new techniques in blood transfusion, to the medical response to the HIV/AIDS epidemic. In this beautifully illustrated and passionately rendered history of the field of haematology, Professor Shaun McCann traces the remarkable developments within haematology and the work of the scientists and pioneers central to these advances. This engaging and authoritative history will appeal to a wide audience including haematologists, nurses and other health care workers in haematology, as well as medical students, and general physicians with an interest in haematology.

Shaun McCann was Professor of Academic Medicine in the University of Dublin, Trinity College from 2005-2011 and was a consultant haematologist, George Gabriel Stokes Professor of Haematology and head of department in St James's hospital, Dublin from 1984 until 2009. He performed the first stem cell transplant for leukaemia in Ireland in 1984. Appointed Medical Director of the Irish Blood Transfusion Service in April 1995 by the Minister for Health during theHepatitis C crisis. He was the first President of the Haematology Association of Ireland.Professor McCann has published over 150 medical articles, numerous book chapters and a number of textbooks for undergraduate medical students. He was Editor-in-Chief of the European Hematology Association Newsletter from 2006-2012 and is currently Chair of the European Hematology Association (EHA) Training on line Unit.