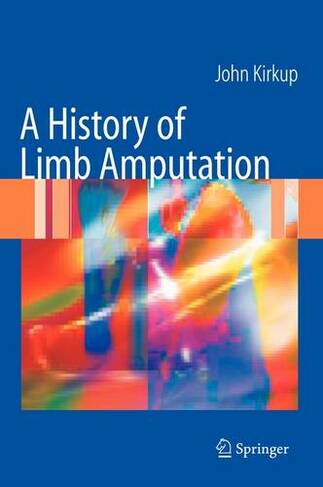 This book opens with a unique historical review of natural amputations due to congenital absence, disease, frostbite, animal trauma, and to punishment and ritual. The advent of surgical amputation and its difficulties form a major part of the book, summarising the evolution of the control of haemorrhage and infection, pain relief, techniques, instrumentation, complications, prostheses, results and case histories. Alternative procedures, increasingly important in the last two centuries, are also debated. 99 Illustrations, black and white; VIII, 184 p. 99 illus.

John Kirkup, MD, MA, FRCS, Dip Hist Med studied at Emmanuel College, Cambridge and St Mary's Hospital, London, qualifying in 1952. After service in the Royal Navy he worked as an orthopedic surgeon for the Bath Clinical Area, Somerset, introducing ankle joint replacement to the United Kingdom in 1976.Always intrigued by the evolution of surgery from its pre-historic roots, Mr Kirkup edited facsimiles of Wiseman's Of Wounds (1676) and Woodall's Surgions Mate (1617), published A Historical Guide to British Orthopaedic Surgery, and contributed chapters in books on Ambroise Pare, on pain management during surgery, on trepanation, on the battle against infection, on damaged surgeon's equipment of the Mary Rose shipwreck and on instrumentation generally. He published a wide variety of journal communications including and extended series on surgical instruments and on the history of foot and ankle surgery, and twelve surgical entries in the New Dictionary of National Biography. He has been Hunterian, Vicary, Sydenham and Hamilton Russell Lecturer, was awarded the Sir Arthur Keith Medal of the Royal College of Surgeons of England, and has advised widely on museum collections, especially in the UK, Portugal and Australia.Formerly President of the British Society for Medical History, President of the History Section of the Royal Society of Medicine, Honorary Archivist of the British Orthopaedic Association and Chairman of the Historical Medical Equipment Society, Mr Kirkup is currently Honorary Curator of the Historical Instrument Collection at the Royal College of Surgeons, London, and Lecture in Surgical History to the Society of Apothecaries, London. He is also about to publish a book on the evolution of surgical instruments.