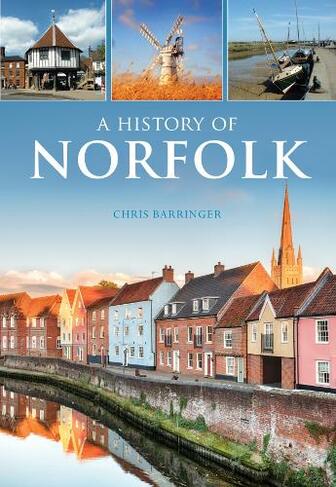 A History of Norfolk

The story of Norfolk and its people began almost a million years ago on the foreshore at Happisburgh. It has a history stretching back into the dimmest mists of time, across whose soil some of our most celebrated national fi gures have walked - from Boudica, to Mary Tudor and Elizabeth, Nelson and Turnip Townshend, Elizabeth Fry and Edith Cavell. Everywhere bears the imprint of that past and every chapter in its history is fascinating. It is a county of great houses, of sweeping parks and large estates, but there are many smaller and no less attractive manor houses and Georgian rectories, often circled by moats or set in intimate parklands of their own. It is a county of small, twisting roads, of lost railways and of reedy waterways plied by pleasure boats. Norfolk has several hundred small villages set amid a scatter of often beautiful and always historically rich market towns. At the centre is Norwich, one of the great historic cities of Europe, with a remarkable heritage of medieval churches, monastic buildings, cathedrals, a great castle, and a glorious assemblage of domestic and commercial architecture. Historian Chris Barringer lost his heart to Norfolk when he moved there in 1966. He became passionate about its landscapes and its extraordinarily rich history, and A History of Norfolk brings together half a lifetime's experience of walking the fields, exploring the towns and villages, researching a treasury of archives, and absorbing the unique magic of this wonderful county. Over 350

This book is the last and greatest work of Chris Barringer, who died in the summer of 2013. John Christopher Barringer was born in Croydon, but soon afterwards his father, a Yorkshireman, changed jobs and the family moved back to Yorkshire, settling in Ilkley. Chris went to Ilkley Grammar School, where he was head boy and was actively involved in sport, especially cricket and rugby. There his love of walking and the countryside introduced him not only to geography but also to local history, showing him the patchwork of distinctive landscapes and localities which make up England. His uncle Harry Scott was editor-proprietor of The Dalesman, Yorkshire's celebrated county magazine founded in 1939. Chris told me that its strong emphasis on landscape, people and history was a formative influence. After national service he was awarded a scholarship to St John's College, Cambridge, where he read geography and decided to become a teacher. He qualified and gained the remarkable distinction of being appointed head of geography in his first position, at the Royal Grammar School in Lancaster. In 1965 his career changed course, when he became resident tutor in Norfolk for the Cambridge University Board of Extra-Mural Studies. He and his family moved to Hethersett, and he quickly started local history groups across the county, at Blakeney, Downham Market, King's Lynn, Mattishall, North Walsham, Norwich and Reepham. He began researching aspects of archaeology and local and regional history, and in 1984 his first two books appeared, volumes on the Yorkshire Dales and the Lake District published for the National Trust. Chris was a wonderful teacher, practical and down to earth yet inspirational, blessed with the ability to challenge and stimulate and his students so that they began to pursue their own researches and investigations. He had the gift of reading landscape, instinctively questioning it-why was there a sharp bend in that road, what were those hummocks in a field, when was that house altered? David Dymond, his colleague and friend for very many years, said that `He was never happier than when organising and leading open-air excursions'. He was involved in a tremendous range of county and local organisations. At the time of his death he was president of the Norfolk Archaeological and Historical Research Group and vice-president of the Norfolk and Norwich Archaeological Society. From 1987 to 2002 he was chairman of the Norfolk and Norwich Heritage Trust. One of his finest achievements during this period was working tirelessly to raise money for the restoration and conservation of Dragon Hall in King Street, securing the future of a medieval merchant's house which is among the greatest architectural and historical treasures of the fine city of Norwich. In 1991 responsibility for the county's adult continuing education was transferred to the University of East Anglia, and Chris became Director of Extra-Mural Studies. This involved him in a lot more administrative work, which he confessed he did not always relish-he liked being out and about-but it strengthened his links with Norfolk's history. When he retired in August 1995 many of his friends and colleagues gathered at the Sainsbury Centre to celebrate his achievements and to present him with East Anglian Studies, a book of 37 papers written in his honour. Chris had lost his heart to Norfolk when he moved there back in 1965 and had become passionate about his adopted county, its landscapes and its extraordinarily rich history. In his last years he wrote this book, which brings together half a lifetime's experience of walking the fields, exploring the towns and villages, researching a treasury of archives, discussing and debating with colleagues, friends and students, and absorbing the unique magic of this wonderful county. A History of Norfolk is a monument to Chris, his contribution to the heritage of the county, and to all the joy, intellectual excitement and infectious enthusiasm whic