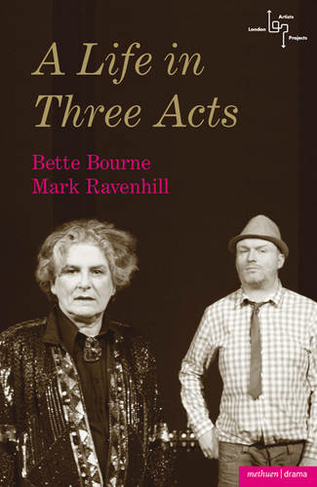 A Life in Three Acts

With honesty, humour and occasional anger, performer Bette Bourne tells the playwright Mark Ravenhill about his brave and flamboyant life. Crafted from transcripts of a series of long, private conversations, actor Bette Bourne reminisces and replays scenes from his life from a postwar childhood,a stint as a classical actor in the late 60s, to living in a drag commune in Notting Hill and being an active member of the Gay Liberation Front. Bette then talks about his touring with the New York based Hot Peaches cabaret group and founding his own cabaret troop, Bloolips, which redefined the term gay theatre by creating their very own unique celebration of dramatic and colourful homosexuality. The piece, in three parts, marks a different series of events in Bette's life to reveal both a portrait of a pioneering, radical individual and a historical document of the struggles and achievements of gay liberation.

Mark Ravenhill's first full-length play Shopping and Fucking was produced in 1996 at the Royal Court. It launched him to immediate fame and defined the stage writing of 1990s. Since then, he has continued to garner critical acclaim for controversial and plays that include Some Explicit Polaroids (Out of Joint), Mother Clap's Molly House (National Theatre), Shoot/Get Treasure/Repeat (Paines Plough/National Theatre) and most recently Over There (Royal Court).