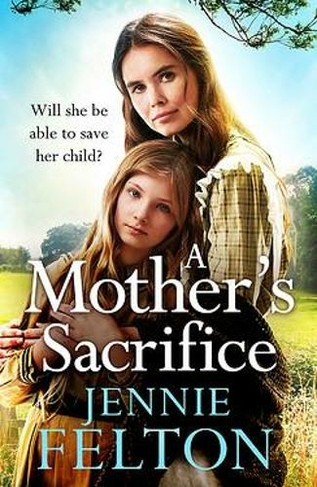 By Jennie Felton (Author)
Hardback
https://www.whsmith.co.uk/products/a-mothers-sacrifice/jennie-felton/hardback/9781472256478-12-000.html £16.79 rrp £20.99 Save £4.20 (20%)
GBP
Availability
In Stock
Free Delivery Available When You Spend £25 Or More
Details
Spend £25 On Products To Receive Free Standard Delivery To Your Home Or Free Next Working Day Click And Collect To Store
Share

'One of the nation's favourite saga writers' Lancashire Post In the grand tradition of Josephine Cox, Dilly Court and Rosie Goodwin, comes a powerfully heartrending new saga from Jennie Felton. A Mother's Sacrifice is a story of family secrets, romance, and triumph in adversity. Will she be able to save her children? Martha Packer is much loved by everyone in the village of Hillsbridge. As the landlady of The Three Feathers, she runs a respectable establishment and is known for her generosity and care for her family and others around her - she even took in two orphan girls to save them from a life of cruelty in the workhouse. So when Martha announces that she has killed her son, Garth, the community is shocked. Garth was undoubtedly a bad seed, but they knew how much Martha adored her first-born. What could have driven her to such extreme actions? Martha refuses to give a reason, but her other children cannot believe their mother is capable of murder. They begin to believe that she is protecting someone - maybe even one of them... For more heartwrenching, heartwarming saga, look out for The Stolen Child, out now! And don't miss Jennie's Families of Fairley Terrace series, which began with Maggie's story in All The Dark Secrets and continued with Lucy's story in The Miner's Daughter, Edie's story in The Girl Below Stairs, Carina's story in The Widow's Promise and Laurel's story in The Sister's Secret.

Jennie Felton grew up in Somerset and now lives in Bristol. She has written numerous short stories for magazines as well as a number of novels under a pseudonym. Her Families of Fairley Terrace Sagas series is about the lives and loves of the residents of a Somerset village in the late-nineteenth century, and started with All The Dark Secrets.Visit Jennie on Facebook www.facebook.com/JennieFeltonAuthor and follow her on Twitter @Jennie_Felton for all her latest news.