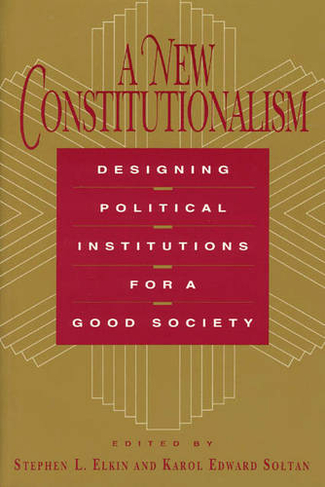 A New Constitutionalism Designing Political Institutions for a Good Society

In The New Constitutionalism, seven distinguished scholars develop an innovative perspective on the power of institutions to shape politics and political life. Believing that constitutionalism needs to go beyond the classical goal of limiting the arbitrary exercise of political power, the contributors argue that it should-and can-be designed to achieve economic efficiency, informed democratic control, and other valued political ends. More broadly, they believe that political and social theory needs to turn away from the negativism of critical theory to consider how a good society should be "constituted" and to direct the work of designing institutions that can constitute a "good polity," in both the economic and civic senses. Stephen L. Elkin and Karol Edward Soltan begin with an overview of constitutionalist theory and a discussion of the new constitutionalism within the broader intellectual and historical context of political and social thought. Charles Anderson, James Ceaser, and the editors then offer different interpretations of the central issues regarding institutional design in a constitutionalist social science, consider various ways of performing the task, and discuss the inadequacy of recent political science to the job it ought to be doing. The book concludes with essays by Ted Lowi, Cass Sunstein and Edwin Haefele which apply these themes to the American regime.