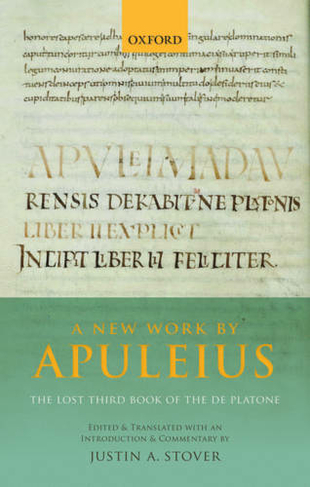 A New Work by Apuleius: The Lost Third Book of the De Platone: Edited and Translated with an Introduction and Commentary by

A New Work by Apuleius presents what may be the first lengthy Latin text from antiquity to be published in almost a century. Marshalling evidence from the text, intertextual relationships, stylistics, stemmatics, codicology, and philosophy, it lays out a compelling case for attributing this work - a summary of 14 of Plato's dialogues - to the second-century polymath Apuleius, author of the Apology, the Florida, the Metamorphoses, and the De Platone, an introduction to Plato for Latin readers. First discovered by Raymond Klibansky, the text is transmitted in one important, but neglected, manuscript of Apuleius' philosophical works. In this volume, Stover reveals that this new work is in fact the lost third book of the De Platone, and provides the key to understanding Apuleius' use and interpretation of Plato. The volume demonstrates that the new work is one of the only extant examples of scholastic ephemera from antiquity, allowing us to see how Apuleius shaped his notes from reading Plato into an independent treatise. Situated between the Latin and Greek worlds as a Latin summary of a Greek text, the new work offers a fascinating insight into the practice of translation in the Latin world, the scholarly methods of antiquity, the development of Middle Platonism, and sheds new light on an under-appreciated facet of a celebrated author. 5 in-text, black and white illustrations

Justin A. Stover is a Post-Doctoral Research Fellow at All Souls College, University of Oxford.