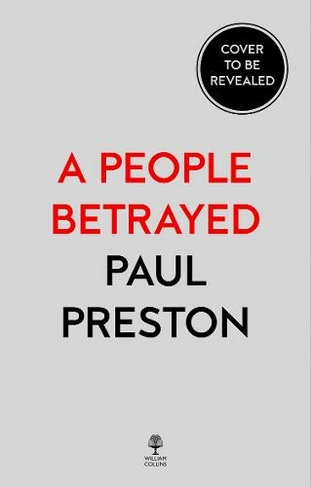 A People Betrayed: A History of Corruption, Political Incompetence and Social Division in Modern Spain 1874-2018

From the foremost historian of modern Spain comes the bloody, much misunderstood story of how, from 1874 to the present day the Spanish people were devastatingly betrayed by their political class, military and Church. This comprehensive history of modern Spain chronicles the fomenting of violent social division throughout the country by institutionalised corruption and startling political incompetence. Most spectacularly during the Primo de Rivera and Franco dictatorships, grotesque and shameless corruption went hand-in-hand with inept policies that prolonged Spain's economic backwardness well into the 1950s. A People Betrayed looks back to the years prior to 1923 when electoral corruption excluded the masses from organized politics and gave them a choice between apathetic acceptance and violent revolution. Bitter social conflict, economic tensions and conflict between centralist nationalism and regional independence movements then exploded into the civil war of 1936-1939. It took the horrors of that war and the dictatorship that followed to break the pattern. The moderation shared by the progressive right and a chastened left underlay a bloodless transition to democracy after 1975. Yet, as before, corruption and political incompetence continued to have a corrosive effect on political coexistence and social cohesion. Sparkling with vivid portraits of politicians and army officers, some corrupt and others clean, recounting the triumphs and disasters of Kings Alfonso XIII and Juan Carlos, A People Betrayed unravels the mystery of why both right and left have been unable or unwilling to deal with corruption and the pernicious clash between Spanish centralist nationalism and regional desires for independence.

SIR PAUL PRESTON CBE is Professor of Contemporary Spanish History at the London School of Economics and was previously a lecturer at the University of Reading and Professor of Modern History at Queen Mary University London. He is a Fellow of the British Academy and holds the Marcel Proust Chair of the European Academy of Yuste. He has been awarded honorary doctorates by universities in Spain and the UK. In 2006, he was awarded the International Ramon Llull Prize by the Catalan Government and, in 2018, the Guernica Peace Prize. Among his many works are Franco: A Biography, Comrades, Doves of War: Four Women of Spain, Juan Carlos, The Spanish Civil War, The Spanish Holocaust, The Last Stalinist, The Last Days of the Spanish Republic and A People Betrayed. In Spain, he was appointed a Comendador de la Orden del Merito Civil in 1986 and awarded, in 2007, the Gran Cruz de la Orden de Isabel la Catolica. He lives in London.