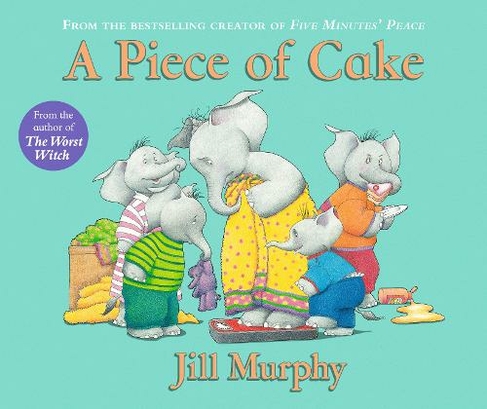 A Piece of Cake: (Large Family)

A stunning new edition of a modern classic in the bestselling Large Family series. "If you are not familiar with these stories, you really have not lived ... you just couldn't get better" Guardian A hilarious tale of family life and the difficulties of dieting, this is a beautiful new edition of a modern classic in the Large Family series. Mrs Large the elephant is feeling a bit wibbly-wobbly - so decides the whole family need to shape up! Biscuits and crisps are out, veggies and jogs are in! But, when you're a hungry elephant ... healthy eating and exercise is no piece of cake! With a foreword and gorgeous foil lettering on the cover and spine, this is a beautiful book to treasure.

Jill Murphy is one of Britain's most treasured author-illustrators. She wrote and illustrated her first book, the bestselling The Worst Witch, while still only eighteen, and went on to create the award-winning Large Family series, which has sold over five million copies worldwide and been adapted for television. Jill's other characters include a small monster called Marlon who stars in the acclaimed The Last Noo-Noo and All for One, and Ruby the bunny, who stars in Meltdown! Jill lives in Cornwall.