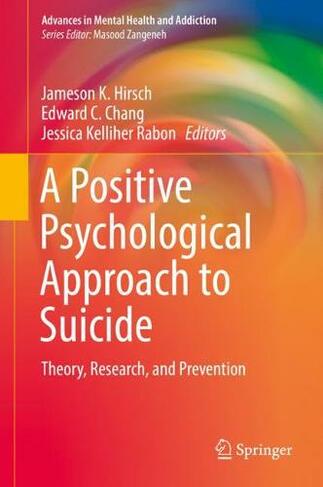 This inspiring resource presents theories, findings, and interventions from Positive Suicidology, an emerging strengths-based approach to suicide prevention. Its synthesis of positive psychology and suicidology theories offers a science-based framework for promoting wellbeing to complement or, if appropriate, replace traditional deficit-driven theories and therapies used in reducing suicidal thoughts and behaviors. Coverage reviews interpersonal, intrapersonal, and societal risk factors for suicide, and identifies protective factors, such as hope and resilience, that can be enhanced in therapy. From there, chapters detail a palette of approaches and applications of Positive Suicidology, from the powerful motivating forces described in Self-Determination Theory to meaning-building physical and social activities. Among the topics covered: Future-oriented constructs and their role in suicidal ideation and enactment. Gratitude as a protective factor for suicidal ideation and behavior: theory and evidence. Considering race and ethnicity in the use of positive psychological approaches to suicide. The Six R's framework as mindfulness for suicide prevention. Community-based participatory research and empowerment for suicide prevention. Applied resiliency and suicide prevention: a strengths-based, risk-reduction framework. Psychotherapists, counselors, social workers, psychiatrists, and health psychologists, as well as educators, clergy and healthcare professionals, will find A Positive Psychological Approach to Suicide an invaluable source of contemporary evidence-based strategies for their prevention and intervention efforts with suicidal clients. 1 Tables, color; 5 Illustrations, black and white; VIII, 334 p. 5 illus.

Jameson K. Hirsch is an Associate Professor of Clinical Psychology, and Assistant Chair, at East Tennessee State University, and maintains faculty appointments in the Department of Psychiatry, University of Rochester Medical Center, the Department of Public Health, East Tennessee State University, and as a Research Scientist at the Mountain Home VAMC. Dr. Hirsch received his Ph.D. from the University of Wyoming, completed his APA-accredited internship at SUNY Upstate Medical Center, and his Post-Doctoral Fellowship at the University of Rochester School of Medicine and Dentistry. His research focuses on protective, positive psychological characteristics that might buffer against psychopathology, particularly depression and suicidal behavior, occurring in the context of medical illness and impairment and in underserved and under-represented groups, including rural, elderly and ethnic minority individuals. Dr. Hirsch has published over 125 peer-reviewed articles on protective factors, and he has presented his research more than 350 times at professional conferences. He currently serves on the Editorial Boards of Suicide and Life-Threatening Behavior, Cognitive Therapy and Research and International Journal of Mental Health and Addiction.Edward C. Chang is a Professor of Clinical Science in the Department of Psychology and Professor of Social Work in the School of Social Work at the University of Michigan, Ann Arbor. He obtained his M.A. and Ph.D. degrees from the State University of New York at Stony Brook. He completed his APA-accredited clinical internship at Bellevue Hospital Center-New York University Medical Center. Dr. Chang has published nearly 200 works on personality, positive psychology, suicide risk, cultural differences, coping, and psychological adjustment. He has also edited more than a dozen books focused on optimism, personality, social problem solving, cognitive behavioral interventions with ethnoracial groups, psychopathology in Asians, and health in Southeast Asians. Dr. Chang has served as Associate Editor of several leading journals in the field, including Cognitive Therapy and Research, the American Psychologist, Journal of Personality and Social Psychology, Asian American Journal of Psychology, and the Journal of Social and Clinical Psychology. Finally, he has won numerous awards for his research and teaching over the years, including the Theodore Millon Award in Personality Psychology.Jessica Kelliher Rabon is a post-doctoral fellow at Greenville Hospital System Children's Hospital in Greenville, SC. She received her Ph.D. in Clinical Psychology at East Tennessee State University, her M.A. in clinical psychology from Western Carolina University, and B.S. in psychology from Furman University. She completed her APA-accredited clinical internship at Virginia Treatment for Children in Richmond, VA. Dr. Rabon has conducted, presented, and published research on a wide range of topics including anxiety, depression, suicidal behavior, hopelessness, self-compassion, future orientation, forgiveness, and optimism. Dr. Rabon's current interests focus on identification of positive psychosocial characteristics that protect against depression and suicidal behavior, especially in vulnerable populations.