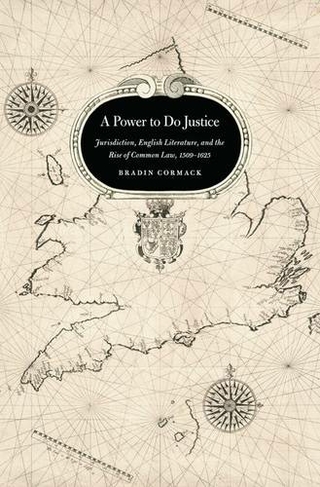 A Power to Do Justice Jurisdiction, English Literature, and the Rise of Common Law, 1509-1625

English law underwent a rapid transformation in the sixteenth century, in response to the Reformation and also to heightened litigation and legal professionalization. As the common law became more comprehensive and systematic, the principle of jurisdiction came under particular strain. When the common law engaged with other court systems in England, when it encountered territories such as Ireland and France, or when it confronted the ocean as a juridical space, the law revealed its qualities of ingenuity and improvisation. In other words, as Bradin Cormack argues, jurisdictional crisis made visible the law's resemblance to the literary arts. "A Power to Do Justice" shows how Renaissance writers engaged the practical and conceptual dynamics of jurisdiction, both as a subject for critical investigation and as a frame for articulating literature's sense of itself. Reassessing the relationship between English literature and law from More to Shakespeare, Cormack argues that where literary texts attend to jurisdiction, they dramatize how boundaries and limits are the very precondition of law's power, even as they clarify the forms of intensification that make literary space a reality. Tracking cultural responses to Renaissance jurisdictional thinking and legal centralization, "A Power to Do Justice" makes theoretical, literary-historical, and methodological contributions that set new standards for law, the humanities, and the cultural history of early modern law and literature. 21 halftones

Bradin Cormack is associate professor of English at the University of Chicago and coauthor of Book Use, Book Theory: 1500-1700.