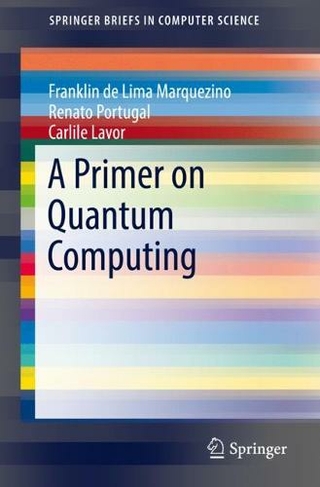 This book is about quantum computing and quantum algorithms. The book starts with a chapter introducing the basic rules of quantum mechanics and how they can be used to build quantum circuits and perform computations. Further, Grover's algorithm is presented for unstructured search discussing its consequences and applications. Next, important techniques are discussed such as Quantum Fourier Transform and quantum phase estimation. Finally, Shor's algorithm for integer factorization is explained. At last, quantum walks are explained in detail covering both the discrete and continuous time models,and applications of this techniques are described for the design and analyses of quantum algorithms. 4 Illustrations, color; 46 Illustrations, black and white; X, 109 p. 50 illus., 4 illus. in color.

Renato Portugal graduated in Physics from the Pontifical Catholic University of Rio de janeiro in 1981 and obtained his PhD degree in Physics at the Brazilian Center for Research in Physics in 1988. He was a visiting professor at the University of Waterloo in 1997 and 2008 and at the Queen's University at Kingston in 1998 in Canada. He is currently a full researcher at the National Laboratory of Scientific Computing (LNCC). Currently, he is working in the area of quantum computing with focus on the following subareas: algorithms for quantum computing, analysis and simulation of quantum walks, and classical cryptography.Franklin de Lima Marquezino graduated in Computer Science from the Catholic University of Petropolis in 2004, and received his PhD degree in Computer Modelling form the National Laboratory of Scientific Computing (LNCC) in 2010. He stayed for one year as postdoctoral researcher also at LNCC. Since 2011, he is an associate professor at the Federal University of Rio de Janeiro, working mainly in the areas of quantum algorithms and quantum walks.Carlile Lavor graduated in Mathematics from the University of Campinas in 1996, and received a PhD in Computer Science from the Federal University of Rio de Janeiro, in 2001. He was a visiting professor at prestigious institutions like Ecole Polytechnique (2008-2009) and Duke University (2013-2014). Since 2005, he has been working at the University of Campinas, where he is now a full professor. He is co-author of the books "Euclidean Distance Geometry" and "A Geometric Algebra Invitation to Space-Time Physics, Robotics and Molecular Geometry" and co-editor of "Distance Geometry: Theory, Methods and Applications" book, all by Springer.