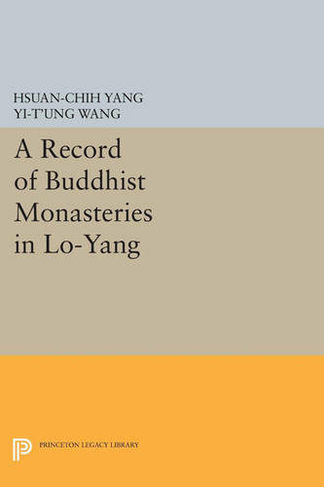 A Record of Buddhist Monasteries in Lo-Yang: (Princeton Library of Asian Translations)

A Record of Buddhist Monasteries in Lo-yang (the Lo-Yang ch'ieh-lan chi) is a major document of Chinese history and literature. This translation of the sixth- century A.D. classic describes the main Buddhist monasteries and nunneries of Lo-yang and the political, economic, and social conditions at a time when that city was the capital of the Northern Wei Dynasty. Originally published in 1984. The Princeton Legacy Library uses the latest print-on-demand technology to again make available previously out-of-print books from the distinguished backlist of Princeton University Press. These editions preserve the original texts of these important books while presenting them in durable paperback and hardcover editions. The goal of the Princeton Legacy Library is to vastly increase access to the rich scholarly heritage found in the thousands of books published by Princeton University Press since its founding in 1905.