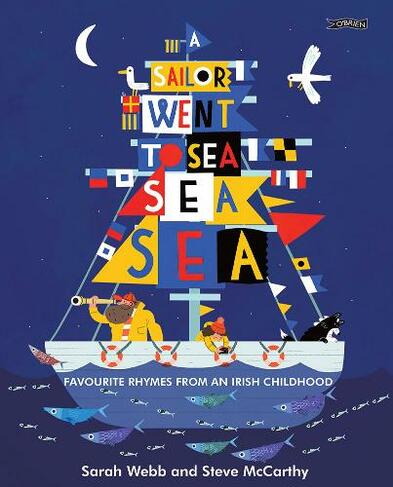 A Sailor Went to Sea, Sea, Sea: Favourite Rhymes from an Irish Childhood

By Sarah Webb (Author), Steve McCarthy (Illustrator)
Hardback
£11.99 rrp £14.99 Save £3.00 (20%)
GBP
Availability
Available / dispatched within 1 - 2 weeks
Free Delivery Available When You Spend £25 Or More
Details
Spend £25 On Products To Receive Free Standard Delivery To Your Home Or Free Next Day Click and Collect To Stores

A beautifully illustrated collection of nursery rhymes to treasure, and songs, poems and rhymes to share. Enjoy Irish favourites like 'Brian O'Linn' and 'I'll Tell Me Ma', classics such as 'My Bonnie Lies Over the Ocean' and 'Monday's Child', silly rhymes that every child will love like 'Beans', 'Pardon Me' and 'On Top of Spaghetti', as well as magical verses for children written by Oscar Wilde, Oliver St John Gogarty, James Joyce and others.

Sarah Webb is a children's author who combines writing with schools visits, reading and giving workshops at festivals, and teaching creative writing. She has won two Irish Book Awards for her children's books (for A Sailor Went to Sea, Sea, Sea and Blazing a Trail), as well as the Children's Books Ireland Award for Outstanding Contribution to Children's Books, awarded in 2015. Sarah worked for many years as a children's bookseller and was writer in residence for Dun Laoghaire-Rathdown County Council in 2016/2017: she is currently the Children's Literary Advisor to Listowel Writers' Week. For more, visit www.sarahwebb.info Steve McCarthy is a Dublin-born art maker and obsessive picture-builder. With a keen interest in colour and character, Steve has managed to sneak his singular style into many forms, from Cartoon Saloon's Oscar-nominated feature film Song of the Sea to children's books and projects for brands worldwide. His work won Best Illustration at the IDI Irish Design Awards 2016. For more, visit www.mrstevemccarthy.comSteve illustrated Sally Go Round the Stars, which was nominated for Irish Children's Book of the Year at the Energy Irish Book Awards, and A Sailor Went to Sea, Sea, Sea, which won!