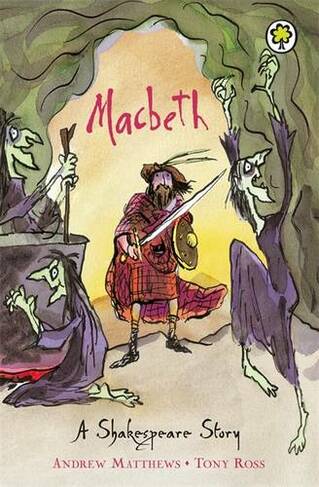 Out, damned spot! A brilliant retelling of this classic tale of witches, murder and madness. With Notes on Shakespeare and the Globe Theatre and Evil in Macbeth.The tales have been retold using accessible language and with the help of Tony Ross's engaging black-and-white illustrations, each play is vividly brought to life allowing these culturally enriching stories to be shared with as wide an audience as possible. Have you read all of The Shakespeare Stories books? Available in this series: A Midsummer Night's Dream, Macbeth, Romeo and Juliet, The Tempest, Hamlet, Twelfth Night, Antony and Cleopatra, Much Ado About Nothing, The Merchant of Venice, Henry V, Julius Caesar, As You Like It, Othello, The Taming of the Shrew, Richard III, and King Lear.

Andrew Matthews is a celebrated children's author, who has written over fifty books and has twice been nominated for the Smarties prize. Tony Ross was born in London and studied at the Liverpool School of Art and Design. He has worked as a cartoonist, a graphic designer, as the Art Director of an advertising agency, and as Senior Lecturer in Art at Manchester Polytechnic. Tony is one of the most popular and successful children's illustrators of all time, best known for illustrating Horrid Henry and the works of David Walliams. Tony's books have been translated into 40 languages in over 100 countries. He lives in Macclesfield.