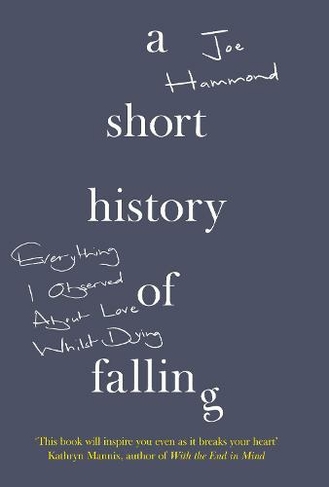 A Short History of Falling: Everything I Observed About Love Whilst Dying

By Joe Hammond (Author)
Hardback
https://www.whsmith.co.uk/products/a-short-history-of-falling-everything-i-observed-about-love-whilst-dying/joe-hammond/hardback/9780008339906-12-000.html £10.65 rrp £12.99 Save £2.34 (18%)
GBP
Availability
In Stock
Free Delivery Available When You Spend £25 Or More
Details
Spend £25 On Products To Receive Free Standard Delivery To Your Home Or Free Next Working Day Click And Collect To Store
Share

A Short History of Falling - like The Diving Bell and the Butterfly, and When Breath Becomes Air - is a searingly beautiful, profound and unforgettable memoir that finds light and even humour in the darkest of places. We keep an old shoebox, Gill and I, nestled in a drawer in our room. It's filled with thirty-three birthday cards for our two young sons: one for every year I'll miss until they're twenty-one. I wrote them because, since the end of 2017, I've been living with - and dying from - motor neurone disease. This book is about the process of saying goodbye. To my body, as I journey from unexpected clumsiness to a wheelchair that resembles a spacecraft, with rods and pads and dials and bleeps. To this world, as I play less of a part in it and find myself floating off into unlighted territory. To Gill, my wife. To Tom and Jimmy. A Short History of Falling is about the sadness (and the anger, and the fear), but it's about what's beautiful too. It's about love and fatherhood, about the precious experience of observing my last moments with this body, surrounded by the people who matter most. It's about what it feels like to confront the fact that my family will persist through time with only a memory of me. In many ways, it has been the most amazing time of my life.

Joe Hammond was a critically acclaimed writer and playwright. He took part in the Royal Court Studio Writers' Group in 2012, having previously been mentored by the theatre and BBC. His debut London production 'Where the Mangrove Grows' played at Theatre503 in 2012 and was later published by Bloomsbury. His memoir, A Short History of Falling, chronicling the last days of his life, was published by 4th Estate in 2019 shortly before his death. He is survived by his wife and two sons.