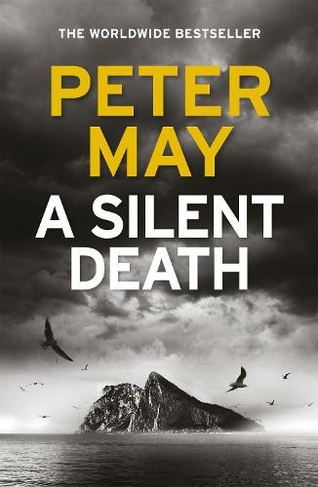 A Silent Death: The brand-new thriller from #1 bestseller Peter May!

By Peter May (Author)
Hardback
https://www.whsmith.co.uk/products/a-silent-death-the-brandnew-thriller-from-1-bestseller-peter-may/peter-may/hardback/9781784294984-03-000.html £9.99 rrp £20.00 Save £10.01 (50%)
GBP
Availability
In Stock
Free Delivery Available When You Spend £25 Or More
Details
Spend £25 On Products To Receive Free Standard Delivery To Your Home Or Free Next Working Day Click And Collect To Store

**THE BRAND-NEW THRILLER FROM THE #1 SUNDAY TIMES BESTSELLER** **'A TERRIFIC WRITER' MARK BILLINGHAM** **PETER MAY: OVER 4.5 MILLION COPIES SOLD WORLDWIDE** Set in Southern Spain, A Silent Death is the scorching new thriller from worldwide bestselling author of The Lewis Trilogy, Cast Iron and I'll Keep You Safe. A SILENT VOW Spain, 2020. When ex-pat fugitive Jack Cleland watches his girlfriend die, gunned down in a pursuit involving officer Cristina Sanchez Pradell, he promises to exact his revenge by destroying the policewoman. A SILENT LIFE Cristina's aunt Ana has been deaf-blind for the entirety of her adult life: the victim of a rare condition named Usher Syndrome. Ana is the centre of Cristina's world - and of Cleland's cruel plan. A SILENT DEATH John Mackenzie - an ingenious yet irascible Glaswegian investigator - is seconded to aid the Spanish authorities in their manhunt. He alone can silence Cleland before the fugitive has the last, bloody, word. Peter May's latest bestseller unites a strong, independent Spaniard with a socially inept Scotsman; a senseless vendetta with a sense-deprived victim, and a red-hot Costa Del Sol with an ice-cold killer.

Peter May was born and raised in Scotland. He was an award-winning journalist at the age of twenty-one and a published novelist at twenty-six. When his first book was adapted as a major drama series for the BCC, he quit journalism and during the high-octane fifteen years that followed, became one of Scotland's most successful television dramatists. He created three prime-time drama series, presided over two of the highest-rated serials in his homeland as script editor and producer, and worked on more than 1,000 episodes of ratings-topping drama before deciding to leave television to return to his first love, writing novels.He has won several literature awards in France, received the USA's Barry Award for The Blackhouse, the first in his internationally bestselling Lewis Trilogy; and in 2014 was awarded the ITV Specsavers Crime Thriller Book Club Best Read of the Year award for Entry Island. Peter now lives in South-West France with his wife, writer Janice Hally.