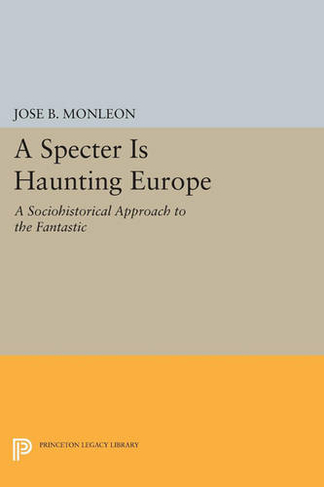 A Specter is Haunting Europe: A Sociohistorical Approach to the Fantastic (Princeton Legacy Library)

Departing from established structuralist or psychological approaches to the fantastic, Jos Monlecn offers an ideological reading of this literary product of mass culture. In an exploration of the origins and development of the fantastic, Monlecn traces the relation of reason to unreason in light of three distinct events that influenced capitalist thinking: the French Revolution, the uprisings of 1848, and the Bolshevik Revolution. The fantastic, Monlecn argues, reflected social tensions and produced a cultural space in which to appropriate fears brought on by the revolutions--to tame the "specter" mentioned by Marx and Engels in The Communist Manifesto. At the same time the fantastic helped carve in Europe a defense of order through the introduction of unreason as a viable discourse. Monlecn pays particular attention to the development of the fantastic in Spain, whose unique economic and cultural conditions form a distinct background against which to test his paradigm for the development of the genre in the rest of Europe. This study touches upon a wide range of works, including those by Bcquer, BazNBn, Galdcs, Alarccn, Maupassant, Shelley, Poe, and James, as well as etchings by Goya. Originally published in 1990. The Princeton Legacy Library uses the latest print-on-demand technology to again make available previously out-of-print books from the distinguished backlist of Princeton University Press. These editions preserve the original texts of these important books while presenting them in durable paperback and hardcover editions. The goal of the Princeton Legacy Library is to vastly increase access to the rich scholarly heritage found in the thousands of books published by Princeton University Press since its founding in 1905.