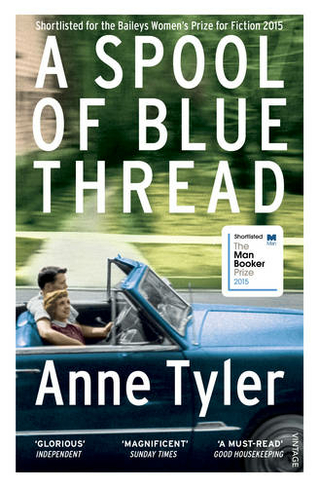 A Spool of Blue Thread

THE NUMBER ONE BESTSELLER SHORTLISTED FOR THE MAN BOOKER PRIZE 2015 SHORTLISTED FOR THE BAILEYS WOMEN'S FICTION PRIZE A RICHARD AND JUDY BOOK CLUB PICK 'It was a beautiful, breezy, yellow-and-green afternoon...' This is the way Abby Whitshank always begins the story of how she and Red fell in love that summer's day in 1959. The whole family on the porch, half-listening as their mother tells the same tale they have heard so many times before. From that porch we spool back through the generations, witnessing the events, secrets and unguarded moments that have come to define the family. From Red's father and mother, newly arrived in Baltimore in the 1920s, to Abby and Red's grandchildren carrying the family legacy boisterously into the twenty-first century - four generations of Whitshanks, their lives unfolding in and around the sprawling, lovingly worn Baltimore house that has always been their home... 'One of my favourite authors' Liane Moriarty 'She spins gold' Elizabeth Buchan 'Anne Tyler has no peer' Anita Shreve 'Anne Tyler is one of my favourite writers and this is a delicious book' Rachel Joyce

Anne Tyler was born in Minneapolis, Minnesota, in 1941 and grew up in Raleigh, North Carolina. Her bestselling novels include Breathing Lessons, The Accidental Tourist, Dinner at the Homesick Restaurant, Ladder of Years, Back When We Were Grownups, A Patchwork Planet, The Amateur Marriage, Digging to America, A Spool of Blue Thread, Vinegar Girl and Clock Dance. In 1989 she won the Pulitzer Prize for Breathing Lessons; in 1994 she was nominated by Roddy Doyle and Nick Hornby as 'the greatest novelist writing in English'; in 2012 she received the Sunday Times Award for Literary Excellence; and in 2015 A Spool of Blue Thread was a Sunday Times bestseller and was shortlisted for the Baileys Women's Prize for Fiction and the Man Booker Prize.