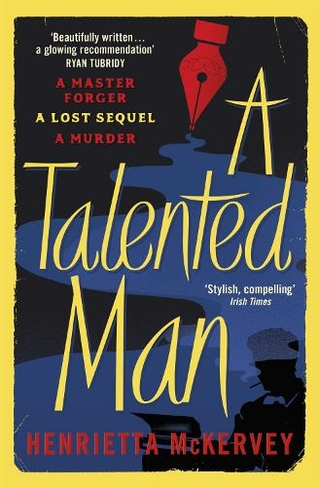 A Talented Man: A gripping suspense novel about a lost sequel to Dracula

IN THE VEIN OF PATRICIA HIGHSMITH, A MASTER FORGER DISCOVERS THE LOST SEQUEL TO BRAM STOKER'S DRACULA ... 'Hangover Square meets The Talented Mr. Ripley, a chilling and engrossing tale of the psychopathic mind' Christine Dwyer Hickey Ellis Spender, only son of a once-esteemed society family, believes money, success and the high life are his birthright -- only prevented by a cruel trick of fate. Struggling to stay ahead of his creditors, the dejected writer decides to forge a sequel to one of the most famous novels of all time, Bram Stoker's Dracula. Its remarkable 'discovery' will create the lifestyle he believes is his due. But as his scheme begins to bear fruit, others who stand to gain become obstacles. And Ellis will stop at nothing to achieve his desires... A Talented Man is a page-turning literary thriller of deception, forgery ... and murder. 'The atmosphere of pre-war London is evoked with skill in this spirited story of literary skulduggery' Joseph O'Connor

Henrietta McKervey is from Belfast and lives in Dublin. She is the author of the acclaimed literary novels What Becomes of Us, The Heart of Everything and Violet Hill. A Talented Man is her fourth novel. @hmckervey www.henriettamckervey.com