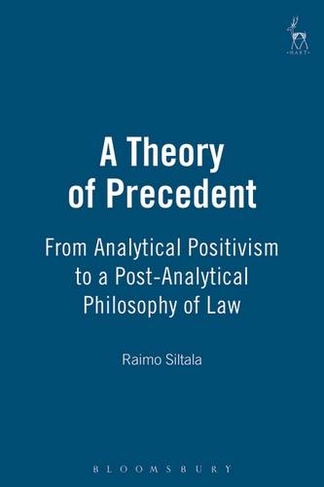 A Theory of Precedent: from Analytical Positivism to a Post-Analytical Philosophy of Law

Analytical jurisprudence has been mostly silent on the role of precedent in legal adjudication. What is the content of a judge's precedent ideology,or the rule of precedent-recognition, by means of which the ratio of a case is to be distinguished from mere dicta? In this study, the author identifies six types of judicial precedent-ideology, among them judicial legislation, systemic construction of the underlying reasons of law in the Dworkinian sense, and a radical re-evaluation of the merits of a prior case in later adjudication, as envisioned by the American Realists. These competing models are tested against judicial experiences in the UK, US, France, Italy, Germany and Finland. By this means Lon Fuller's famous 'internal morality of law' is shown to function rather poorly in the context of precedents, and the author therefore suggests a redefinition of the rule which makes it work for precedent. This, in turn leads the author to confront fundamental questions about the normative nature of law. Is Kelsen's grundnorm or Hart's ultimate rule of recognition a valid rule, in the image of legal rules proper, or is it merely a social fact, observable only in the practices and behaviour of judges and other officials? The author claims that Hart is caught between Kelsen and J.L. Borges, the late Argentinian fabulist, in so far as the ontology and epistemology of the rule of recognition are concerned. This leads the author to the conclusion that the two predicaments affecting analytical positivism, namely the threat of endless self-referentiality, or infinite regress, can only be accounted for by means of recourse to the philosophy of deconstruction as posited by Jacques Derrida. bibliography, index

Raimo Siltala is Professor of Law at the University of Helsinki.