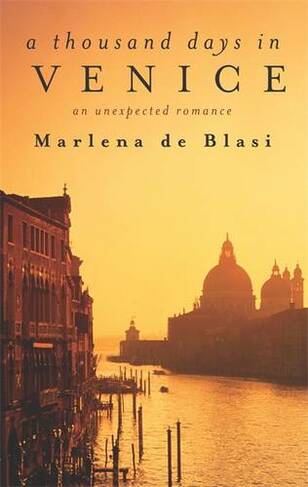 A Thousand Days In Venice: An Unexpected Romance

When Fernando spots her in a Venice cafe and knows immediately that she is The One, Marlena de Blasi is caught off guard. A divorced American woman travelling through Italy, she thought she was satisfied with her life. Yet within a few months, she quits her job as a chef, sells her house, kisses her two grown-up kids goodbye, and moves to Venice. Once there, she finds herself sitting in sugar-scented pasticcerie, strolling through sixteenth-century palazzi, renovating an apartment overlooking the seductive Adriatic Sea, and preparing to wed a virtual stranger in an ancient stone church. As this transplanted American learns the hard way about the peculiarities of Venetian culture, we are treated to an honest, often comic view of how two middle-aged people, both set in their ways but also set on being together, build a life. A THOUSAND DAYS IN VENICE is filled with the foods and flavours of Italy and peppered with recipes and culinary observations. But the main course here is about a woman who falls in love with both a man and a city, and finally finds the home she didn't know she was missing.

Marlena de Blasi has been a chef, a journalist, a food and wine consultant and a restaurant critic. The author of two cookbooks, one of which won the James Beard Award, she now directs gastronomic tours through Tuscany and Umbria.