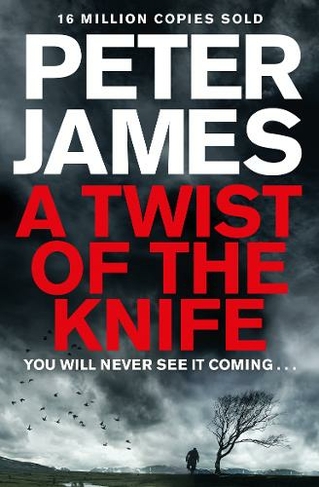 A Twist of the Knife

A Twist of the Knife is Peter James' gripping first full-length collection of thirty short stories, including all the stories featured in Short Shockers 1 & 2 plus many more. With each twist of the knife, a chilling new journey begins . . . From a woman intent on bizarre revenge, to a restaurant critic with a morbid fear of the number thirteen; and from a man arranging a life-changing assignation, to a couple heading for a disaster-filled vacation . . . In multi-million-copy bestselling author Peter James' collection of short stories we first come to meet Brighton's finest detective, Roy Grace, and read the tale that went on to inspire James' hugely successful novel, Dead Simple. James exposes the Achilles heel of each of his characters, and makes us question how well we can trust ourselves, and one another. Each tale carries a twist that will haunt readers for days after they turn the final page . . . Combining every twisted tale from the ebook bestsellers Short Shockers One and Short Shockers Two, with a never-seen-before collection of new material, A Twist of the Knife shows Peter James as the undisputed grand master of storytellers with this sometimes funny, often haunting, but always shocking collection.

Peter James was educated at Charterhouse then at film school. He lived in North America for a number of years, working as a screenwriter and film producer before returning to England. His novels, including the Sunday Times Number One bestselling Roy Grace series have been translated into thirty-six languages, with world sales of sixteen million copies, and three have been filmed. In addition to his popular Roy Grace series, Peter has also written several standalone titles, including The House on Cold Hill, The Perfect Murder, Atom Bomb Angel and Billionaire. He divides his time between his homes in Notting Hill, London and near Brighton in Sussex.