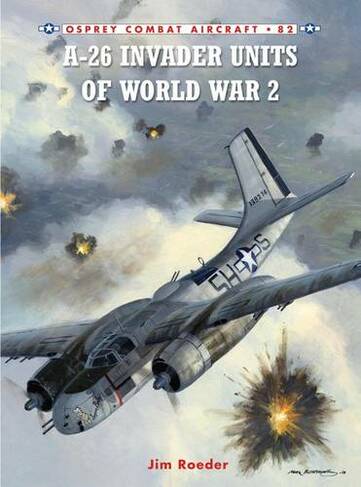 Designed to combine the bombing capability of the B-26 Marauder with the versatility of the ground-attack A-20 Havoc, the A-26 Invader would become the USAAF's attack bomber par excellence. Capable of flying low-level strafing or conventional bombing missions by simply changing the nose configuration of the aircraft, the Invader first saw action in 1943 in the Pacific Theatre attacking Japanese-held islands. Arriving in Europe several months later, the A-26 served with distinction for the remainder of World War 2. In fact, the design proved so successful that it would go on to fly combat missions for a further two decades. Written by military aviation expert, Jerry Scutts, and illustrated with brand-new colour profiles and rare photography, this is the first book to focus exclusively on the A-26's missions in World War 2. Illustrations (some col.)

Jerry Scutts has worked in the field of aviation publishing since the late 1960s, writing over 40 books that have covered a broad spectrum of subject matter ranging from US Navy floatplane fighters in World War 2 to the exploits of the USAF's Phantom IIs over Vietnam. His specialist areas are the Luftwaffe and the US Army Air Forces in World War 2, and he originally appeared on the Osprey list as long ago as 1977, when he wrote the second volume in the now much sought after Air Cam Air War series. Many of the jacket illustrations in this series were also painted by him. Jerry has been a regular contributor to Osprey's Aircraft of the Aces series since its inception in 1994. The author lives in London, England.