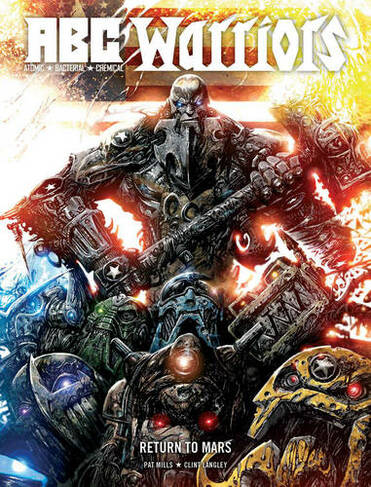 By Pat Mills (Author), Clint Langley (Illustrator)
Hardback
£11.99 rrp £14.99 Save £3.00 (20%)
GBP
Availability
In Stock
Free Delivery Available When You Spend £15 Or More
Details
Spend £15 On Products To Receive Free Standard Delivery To Your Home Or Free Next Day Click and Collect To Stores
Share

Mars, the far future. Tasked with increasing the peace on the war-ravaged Red Planet, the A.B.C. Warriors are reunited with one of their oldest number - the mechanic known as Tubal Caine AKA Happy Shrapnel. As Happy explains how he died and was subsequently resurrected by Medusa (the planetary consciousness). Happy's story exposes the identity of the villain responsible for most of the trouble on Mars - 'the father of all A.B.C. Warriors' needs to be executed, and the Warriors are going to need the help of another old ally to carry out the mission... EU Toy Safety Directive - No warning

Pat Mills is the creator and first editor of 2000 AD. For the Galaxy's Greatest Comic, he is the writer and co-creator of ABC Warriors, Finn, Flesh, Nemesis the Warlock, Slaine, M.A.C.H 1, Harlem Heroes, Savage, Defoe and Greysuit. He also developed Judge Dredd and wrote one of the early Dredd serials - The Cursed Earth. He wrote Third World War for Crisis!, a politically-charged spin-off from 2000 AD, and Black Siddha for the Judge Dredd Megazine.Clint Langley began his 2000 AD career with the fully painted artwork of his co-created series Dinosty and he has also illustrated Judge Dredd, Nemesis The Warlock, Outlaw, Sinister Dexter and Tales of Telguuth. As well as working for 2000 AD, Clint has produced covers for Games Workshop and Marvel publications and is the winner of the 2007 Inquest Gamer Fan Awards for Best Artist.