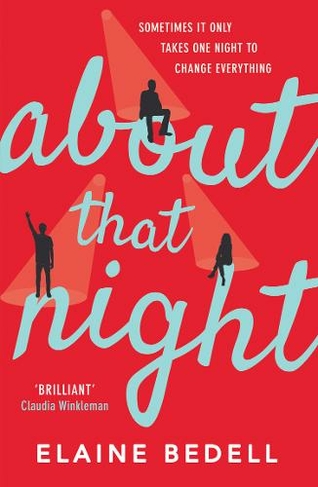 By Elaine Bedell (Author)
Paperback
https://www.whsmith.co.uk/products/about-that-night/elaine-bedell/paperback/9780008297688-12-000.html £6.55 rrp £7.99 Save £1.44 (18%)
GBP
Availability
In Stock
Free Delivery Available When You Spend £25 Or More
Details
Spend £25 On Products To Receive Free Standard Delivery To Your Home Or Free Next Working Day Click And Collect To Store

'The most brilliant book. I couldn't put it down' Claudia Winkleman 'Brilliantly entertaining' SUNDAY MIRROR 'Gripping' DAILY MAIL 'Fun, pacy... crackles with energy' HEAT 'The best kind of insider gossip' SUNDAY PEOPLE 'Gripping' OK! Sometimes it only takes one night to change everything... Elizabeth Place might have been jilted on her wedding day one year ago, but at least she's still got her brilliant job producing one of the biggest shows on TV! But when larger-than-life TV host, Ricky Clough, dies live on air, her life is sent spinning out of control. And with foul play suspected, the spotlight is turned firmly on his colleagues - especially Hutch, the man desperate for Ricky's job and whom Elizabeth is secretly dating. As her world comes crashing down around her, Elizabeth realises that perhaps the only person she can really trust, is herself... Readers love About That Night: 'A brilliant debut!' 'Full of surprises' 'A fabulous debut' 'I couldn't put this book down' 'A marvellous story' 'Fabulous [and] wickedly funny' 'A brilliant book' 'Addictive' 'Thoroughly enjoyable ... Five stars'

Elaine Bedell was a BAFTA award-winning TV producer before becoming Controller of Entertainment at the BBC and Director of Entertainment & Comedy at ITV. She has commissioned and produced some of the UK's most popular entertainment shows, including The X Factor, Strictly Come Dancing, Take Me Out, Britain's Got Talent, The One Show, Top Gear and Saturday Night Takeaway. She lives in Hackney and has two children. She is currently Chief Executive of the Southbank Centre. About That Night is her first novel.