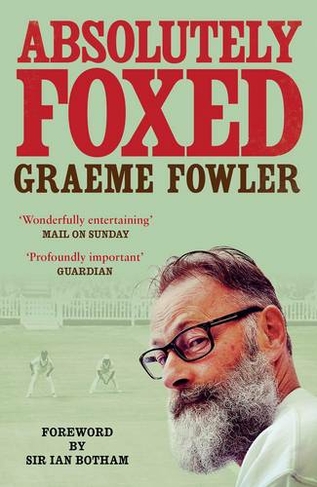 By Graeme Fowler (Author)
Paperback
https://www.whsmith.co.uk/products/absolutely-foxed/graeme-fowler/paperback/9781471142321-12-000.html £7.37 rrp £8.99 Save £1.62 (18%)
GBP
Availability
In Stock
Free Delivery Available When You Spend £15 Or More
Details
Spend £15 On Eligible Products To Receive Free Standard Delivery To You Home Or Free Next Working Day Click And Collect To Store
Share

'Wonderfully entertaining' Mail on Sunday; Profoundly important' Guardian Graeme Fowler - former England cricketer, happy-go-lucky joker and inspirational coach - was 47 when depression struck. Suddenly one of the most active men you'd ever meet couldn't even get up off the sofa to make a cup of tea. In Absolutely Foxed, a cricket memoir like no other, Fowler takes the reader on a vivid ride, with riotous stories of life on England tours, partying with Ian Botham and Elton John, combined with a moving account of his battle with mental-health issues, Seen by many as a maverick, happy-go-lucky figure, Fowler became a hugely influential coach, and is one of the most original thinkers about the game. He's battled and won against the best spinners in India, and the fastest bowlers from the West Indies - he's even found himself at the centre of a tabloid storm. Fowler looks back over his 40 years in the professional game, spending 16 years on the county circuit with Lancashire and Durham, and three years as an England international - a period that was cut short by a life-threatening injury. He followed that with a spell working on Test Match Special, before running the Durham Centre of Excellence for 18 years. In his Foreword, lifelong friend Sir Ian Botham describes Fowler as 'one of the gutsiest I ever encountered', but also points out how he 'made a dressing room tick'. Those elements of courage, knowledge and humour are all present in Absolutely Foxed - a truly unmissable read. 'A very honest, thought-provoking autobiography' David Lloyd, Daily Mail 8pp colour photographs EU Toy Safety Directive - No warning

Graeme Fowler was born in Lancashire in 1957 and went on to play for his home county and for Durham until 1994. Between 1982 and 1985, he played in 21 Tests for England. After retiring from the game, in 1996 he set up the Durham Cricket School of Excellence and was head coach of the Durham MCCU side until 2015. He has also worked as a TMS commentator.