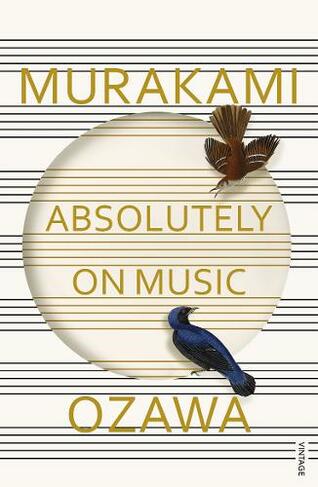 An unprecedented glimpse into the minds of two maestros. Haruki Murakami's passion for music runs deep. Before turning his hand to writing, he ran a jazz club in Tokyo, and the aesthetic and emotional power of music permeates every one of his much-loved books. Now, in Absolutely on Music, Murakami fulfills a personal dream, sitting down with his friend, acclaimed conductor Seiji Ozawa, to talk about their shared interest. They discuss everything from Brahms to Beethoven, from Leonard Bernstein to Glenn Gould, from record collecting to pop-up orchestras, and much more.

Haruki Murakami (Author) Haruki Murakami is the author of many novels as well as short stories and non-fiction. His books include Norwegian Wood, The Wind-Up Bird Chronicle, Kafka on the Shore, 1Q84, What I Talk About When I Talk About Running, Colorless Tsukuru Tazaki and His Years of Pilgrimage, The Strange Library and Wind/Pinball. His work has been translated into more than 50 languages, and the most recent of his many international honours are the Jerusalem Prize and Hans Christian Andersen Literature Award. Seiji Ozawa (Author) Seiji Ozawa served as music director of the Boston Symphony Orchestra for twenty-nine years, and was music director of the Toronto Symphony Orchestra, the San Francisco Symphony, the Chicago Symphony Orchestra's Ravinia Festival, and Wiener Staatsoper. With Kazuyoshi Akiyama, he formed the Saito Kinen Orchestra and is the director of the Seiji Ozawa Matsumoto Festival. Ozawa has been deeply involved in musical education through his work with Tanglewood Music Center Orchestra, the Ozawa International Chamber Music Academy Okushiga, Seiji Ozawa International Academy Switzerland and as founder of the Seiji Ozawa Music Academy Opera Project, organizations which provide opportunities to outstanding students in Asia and Europe. Among his many honours, Ozawa has been awarded the Officier de la Legion d'Honneur in France, the Japanese Order of Culture, the Kennedy Center Honors, and a Grammy Award for Best Opera Recording.