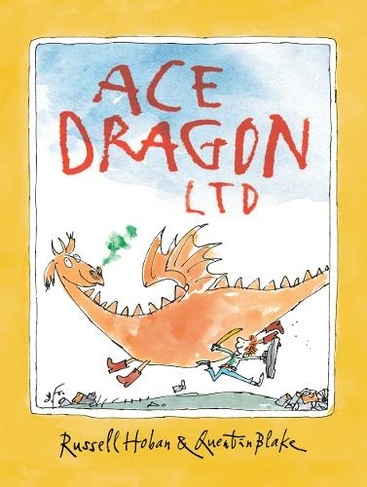 By Russell Hoban (Author), Quentin Blake (Illustrator)
Hardback
https://www.whsmith.co.uk/products/ace-dragon-ltd/russell-hoban/quentin-blake/hardback/9781406357011-12-000.html £10.65 rrp £12.99 Save £2.34 (18%)
GBP
Availability
In Stock
Free Delivery Available When You Spend £25 Or More
Details
Spend £25 On Products To Receive Free Standard Delivery To Your Home Or Free Next Working Day Click And Collect To Store
Share

A fire-breathing dragon takes a boy on a fantastic sky-high adventure in this irresistible Hoban and Blake classic. From the inimitable duo of Russell Hoban and Quentin Blake, the pair behind the hilarious tales of Captain Najork, comes a story about a little boy, a fire-breathing dragon, and their sky-high adventure! "I can make fire come out of my nose and mouth," the dragon under the pavement tells John. "I can fly. I can spin gold into straw if you have any gold." John doesn't have any gold - and he doesn't need any straw. (Not yet, anyway.) The dragon tells John that if he fights the dragon and wins, the dragon will take him flying." What a challenge! Where will it lead? John soon finds out - and he also finds out that you just never know when a bundle of straw might come in handy... With sword-flashing excitement, a moon landing and plenty of magic, this irresistible page-turner is brought back into print in a bigger format - and a beautiful, more colourful, new edition.

Russell Hoban is the author of many famous novels, including Turtle Diary and Riddley Walker, which won the John W. Campbell Award for science fiction. He also wrote over 50 children's books, including such classics as The Mouse and His Child, The Sea-Thing Child, The Twenty Elephant Restaurant, Jim's Lion, Soonchild and, most recently, Rosie's Magic Horse. Born in Pennsylvania in 1925, he moved in 1969 to London, where he lived until his death in 2011.Quentin Blake is one of the world's foremost illustrators, particularly renowned for his collaboration with writers such as Russell Hoban, Michael Rosen, Joan Aiken and Roald Dahl. His books have won numerous awards, including the Whitbread Prize, the Kate Greenaway Medal and the Hans Christian Andersen Award for Illustration. In 1999 he was appointed the first Children's Laureate, in 2005 was created a CBE and in 2013 received a knighthood for his services to illustration. He lives in South West London. Find Quentin online at www.quentinblake.com and on twitter as @QuentinBlakeHQ.