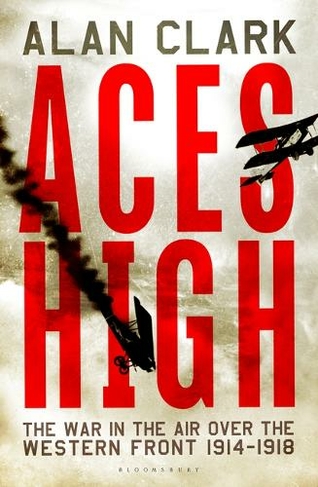 Aces High is the vivid chronicle of aerial warfare over the Western Front in World War One and the personalities that characterised the era. These were the airmen who became legends in their own lifetimes: Albert Ball, Manfred von Richthofen (also known as the Red Baron), Mick Mannock, Rene Fonck and Georges Guynemer. The key to maintaining military superiority was by perfecting the aeroplane, which meant many of these pilots were flying dangerous, untested machines. From the birth of powered flight for reconnaissance purposes to the development of strategic bombing and the creation of the Royal Air Force in 1918, this was as much a war of technological advances as it was of skill and endurance.

Alan Clark, 1928 -1999A British Conservative MP and diarist, Clark is perhaps best known from the years that he served as a junior minister in Margaret Thatcher's governments at the Departments of Employment, Trade, and Defence, and in the Privy Council. Despite being a slightly controversial character politically, he wrote throughout his life and parts of his diaries were published and subsequently televised. He was the author of several books of military history, including his controversial work The Donkeys (1961), which is considered to have inspired the musical satire, Oh, What a Lovely War! And Aces High, The War in the Air Over the Western Front 1914-18 (1973)