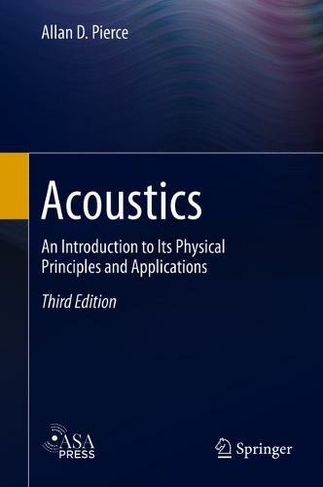 Acoustics: An Introduction to Its Physical Principles and Applications (3rd ed. 2019)

This corrected version of the landmark 1981 textbook introduces the physical principles and theoretical basis of acoustics with deep mathematical rigor, concentrating on concepts and points of view that have proven useful in applications such as noise control, underwater sound, architectural acoustics, audio engineering, nondestructive testing, remote sensing, and medical ultrasonics. Since its publication, this text has been used as part of numerous acoustics-related courses across the world, and continues to be used widely today. During its writing, the book was fine-tuned according to insights gleaned from a broad range of classroom settings. Its careful design supports students in their pursuit of a firm foundation while allowing flexibility in course structure. The book can easily be used in single-term or full-year graduate courses and includes problems and answers. This rigorous and essential text is a must-have for any practicing or aspiring acoustician. 218 Illustrations, black and white; XLI, 768 p. 218 illus.

Allan D. Pierce was born in 1936 and spent his early years in Iowa, Kansas, and New Mexico. After receiving a Ph.D. in Physics from MIT, he was employed by RAND (1961-1963) and Avco (1963-1966). His work during these years was concerned primarily with the analysis of infrasonic waveforms generated by thermonuclear explosions, and this broadened into a life-long interest in all aspects of physical acoustics, applied mechanics, vibrations, and wave physics. From 1966 to 2012 he held a succession of professorial appointments - at MIT (1966-1973), Georgia Tech (1973-1988), Penn State (1988-1993), and Boston University (1993-2012). He retired from BU in 2012, and founded the Cape Cod Institute for Science and Engineering in 2017. He is a Fellow of the Acoustical Society of America and of the American Society of Mechanical Engineers, and is a recipient of the ASA Silver Medal in Physical Acoustics and the ASA Gold Medal, the ASME Per Bruel Gold Medal, the Rossing Prize for Acoustics Education, and the Gold Medal of the Acoustical Foundation of India. Over the years he has had many editorial positions, including being the founding co-Editor-in-Chief of the Journal of Computational Acoustics and the Editor-in-Chief of the Acoustical Society of America. He was the founding editor of Proceedings of Meetings in Acoustics.