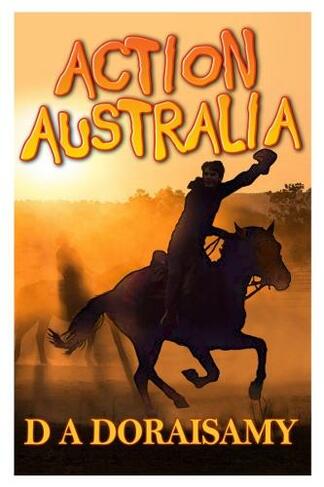 By D A Doraisamy (Author)
Paperback
https://www.whsmith.co.uk/products/action-australia-book-3-in-the-action-series/d-a-doraisamy/paperback/9781916427136-12-000.html £5.94 rrp £6.99 Save £1.05 (15%)
GBP
Availability
In Stock
Free Delivery Available When You Spend £25 Or More
Details
Spend £25 On Products To Receive Free Standard Delivery To Your Home Or Free Next Working Day Click And Collect To Store
Share

Holidays in the outback were supposed to be boring but snakes, cattle duffing and caves changed my mind. I never knew how much danger lived in the bush. Country life is something else. 21 pencil sketches

Author Denise Doraisamy is a primary school teacher who travelled the world and fell in love with Africa, India and many other places.Her stories reveal the natural world as encountered by her 13-year-old protagonist, Hugo Blake who sketches his travels.Through her own colourful adventures, the author hopes to influence her readers to boldly interact with any society.`Children should be encouraged to feel at home in reality. I want my readers to take a break from their computer games and `virtual worlds' to enter the real world and embrace the future with confidence'. Her first book Action Africa would appeal to young readers for adventure. It is neither fantasy based nor war dominated. It is a story of courage and fun with an identifiable hero. Action India is the second in the series, where adventures with elephants and trains draw the reader into the unbelievable.The adventure in Action Australia, her third book, is full of danger and surprise and is derived from the author's experiences while living in outback Australia.The fourth in the series, Action Down Under is packed with the unexpected that leads to so much drama, it will have you gasping. Hugo had no idea Australia held this much action.The fifth in the series, Action in The Long White Cloud deals with danger, mishap and near death. Hugo must deal with the consequences of his actions and so develops a better understanding of what it is to be truly human.